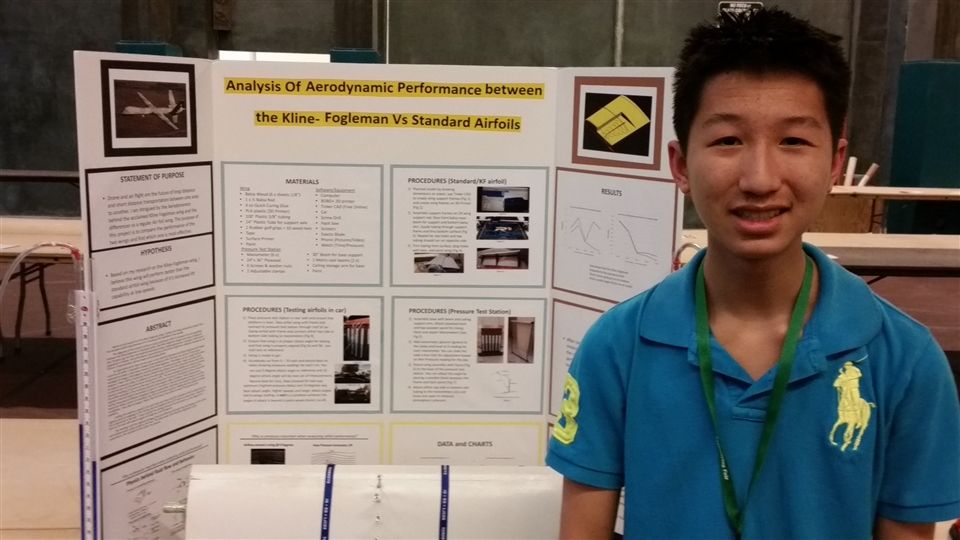 5/4/2017
By Communications
Congratulations to Ken Lew ’20 for winning first place in the Senior Division Engineering Fuel and Transport Category and the U.S. Navy Science and Technology award at the Greater San Diego Science and Engineering Science Fair. Over 1,200 Grades 7–12 students in San Diego or Imperial County entered a project for screening and a possible invitation to the fair.

Using the knowledge from Upper School science teacher Dan Padgett’s physics class, Ken wrote his scientific abstract, conducted lab research and was able to explain the science behind his experiment. This was essential to the completion of his project, Analysis Of Aerodynamic Performance between the Kline-Fogleman vs. Standard Airfoils. Click here for Lew’s abstract. In his words, Ken describes his experiment:
With the increasing use of drones, lower speed planes, etc. in urban areas, I thought it would be interesting to compare the standard airfoil wing to the Kline-Fogleman wing that can be of use to general applications. My hypothesis was the Kline-Fogelman wing would perform better than the standard airfoil wing because of it's increased lift capability at low speeds. In order to test my hypothesis, I made a standard airfoil wing and a Kline-Fogleman variation of the wings using a 3D printer and tested it under different angles of attack and different velocities. The results from the experiment do show the Kline-Fogelman wing performs better than the standard airfoils wing under low speed (50 miles) and 10 degrees attack angle by creating more lift.
Ken qualified to compete in the State Science Fair but did not attend due to finals week. Next year, he plans on competing again in hopes of winning the sweepstakes award to participate in the International Intel Science Fair.
Back