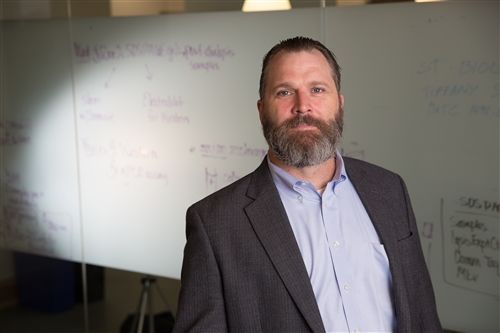 Working in the Shadows to Bring Light to Others

12/12/2017
By Michelle Choate
We’ve all watched the stories on the news with horror and panic: An Ebola outbreak in Africa. Anthrax found in a mail room in New York City. The Zika virus spreading across Brazil and beyond. We see footage of courageous doctors and aid workers stepping in to treat the victims with little regard for their personal safety. What we don’t see are the biosurveillance specialists, the scientists who toil in the field and the labs, collecting and analyzing a seemingly endless stream of blood vials and swabs to characterize the biological threat and develop a plan for its containment and eradication. Though they work mostly anonymously, biosurveillance specialists play as critical a role in international public health as the folks we see on the news—and they’re as personally invested.
Evan Skowronski ’87 is one of those behind-the-scenes scientists who helps provide safety and security in matters of public health. Currently the principal and chief scientific officer at TMG Biosciences, Skowronski works with the U.S. government, NGOs, global health and safety agencies, and international universities on matters of biosurveillance and microbial characterization programs.

Biosurveillance encompasses a broad range of diseases and disease sources, from insect-borne diseases and other “acts of Nature” to acts of bioterrorism, such as the Anthrax threat of 2001. Skowronski and his colleagues play specific roles. “I’m a bug guy,” he explains. “I look for the bugs, and I don’t care what bug it is. If it’s toenail fungus, TB, AIDS, [or] Zika, my job is enabling the technology to define the problem and transmitting that information to the right people who can then go and fix the problem.”
Tracking It
Though his work is extremely complex, Skowronski has a rather simple way of explaining it: What he and his colleagues do is the second step in a three-step process he refers to as “Notice it, track it, end it.” Step one is typically the purview of primary care physicians and public health officials, which starts when patterns emerge revealing something abnormal or unexpected happening in their patients. In the case of the AIDS epidemic, doctors in New York City noticed that a large number of young gay men were coming down with Pneumocystis pneumonia (PCP), a rare lung disease that was typically seen in much older people who had serious health problems. With Zika, there was a spike in the rate of children born with microcephaly, a birth defect.

“The doctors know that something is wrong and that the health community needs to figure out what it is,” says Skowronski. That’s where people like him come in to “track it.” The genomic sequencing they perform provides the strain identification and gene-by-gene characterization of the organism, which in turn allows for the development of assays to screen thousands of samples to identify the scope of the outbreak. Then medical countermeasures (e.g., vaccines and drugs), public education and other tools such as quarantine can end the outbreak.
Detection for the Greater Good
Skowronski’s commitment to public health and safety extends far beyond the lab. Given all that he knows about infectious disease, he feels compelled to leverage his knowledge for the good of others, anytime, anywhere. A few years ago, amidst the H1N1 flu outbreak, Skowronski was waiting for his plane to take off from Reno, Nevada, to Washington, D.C., when he noticed a teenage girl across the aisle exhibiting obvious signs of a flu-like illness. Skowronski knew that if the plane took off with the girl on it, she would expose her fellow travelers to the flu, particularly the elderly woman sitting next to her.

After talking to the flight attendant, who initially didn’t recognize the severity of the girl’s symptoms, the captain was finally brought in. “Knowing what I know, seeing what I’ve seen, I wasn’t about to give up,” he says. The passenger was assessed, and it was determined she was too ill to fly. While many would have been tempted to ignore her condition, Skowronski forged ahead with a sense of urgency and obligation to the public good.
Where Passion and Opportunity Meet
As a child, Skowronski’s natural dedication and curiosity were nurtured by his grandmother, who was an elementary school teacher for more than 50 years. “My grandmother taught me to read and taught me what was out in nature,” says Skowronski. “She gave me science projects to do at home. We read the newspaper and medical textbooks together. She engendered a way of looking at the real world and wanting to learn about it. To me, that’s science in a nutshell.”


During his time at La Jolla Country Day School, he found two other mentors who encouraged his love of science: chemistry teacher Tom Perrotti and biology teacher Barry Fogwell. “Those two teachers had a profound impact on me,” says Skowronski. “Both disciplines are the underpinning of the work that I do, and these extraordinary educators set me on the path toward my future career. So many students avoid science and mathematics, citing poor quality teachers; I only wish there were more Fogwells and Perrottis out there.”


After receiving his bachelor’s from Duke University, Skowronski worked for a year doing clinical research for Sydney Smith, a world-famous cardiologist. While doing a postdoctoral fellowship in cell biology at the La Jolla Institute for Allergy and Immunology, a former colleague invited him to work on the Human Genome Project, where he helped sequence the first human genome. 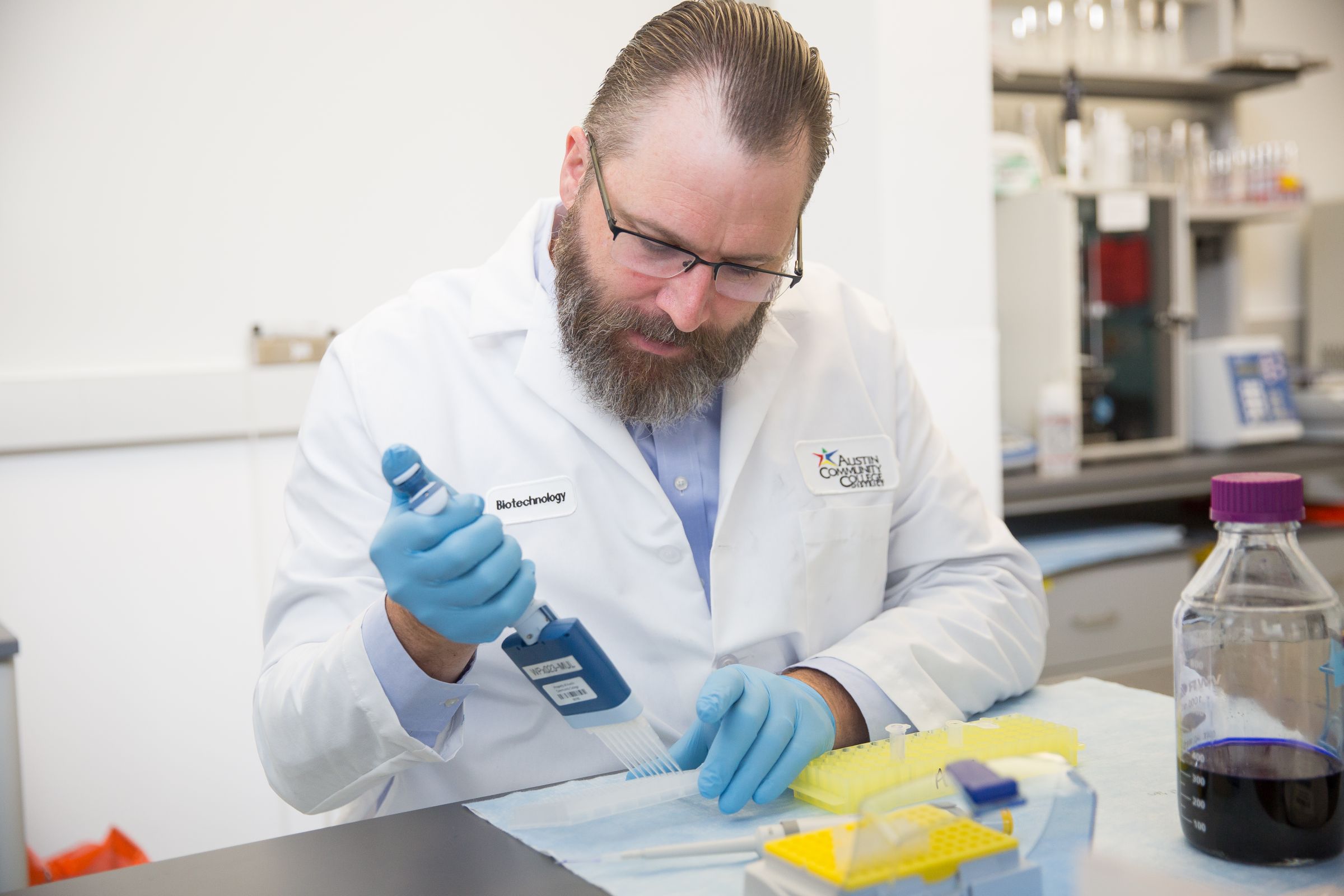 In October 2001, that same colleague reached out again, this time with a request that would alter his career—and his life: “Please drop everything you’re working on now and join us in containing the Anthrax crisis.” Skowronski shares, “It was one of the more excruciating times in my life, but also one of the best.” Skowronski ran the wide area surveillance labs for Washington, D.C., for about a month and then helped set up routine surveillance. That project later morphed into Biowatch, which tracks the air quality in the United States, looking for specific pathogens. “That’s how I got pulled into the response and public health arena,” he explains. “And I’ve been doing it ever since.”

Some of Skowronski’s most meaningful moments took place when he served as division chief for the Edgewood Chemical Biological Center, which is the U.S. Army’s primary lab for non-medical chemical and biological defense. There he did research in pathogen genomics, bioinformatics, decontamination, structural biology, and other discrete fields of study to support soldiers in the field, to make them safer, better equipped, and more resilient to do their jobs. “It was really encouraging to work with the folks in uniform,” says Skowronski. “I feel like I’ve done a lot of things in my career to make a difference, but that was really special, for sure.”
Miles to Go Before They Sleep…
Skowronski and his colleagues cannot rest on their laurels. For every outbreak that is contained and burned out (e.g., the 2014 Ebola outbreak in West Africa), there is the fear of the next one. And there are questions about what can be done better next time to contain things more quickly and to prevent lives from being lost. How can a vaccine for Ebola that’s stored in the United States be transported promptly and effectively to remote areas in Africa?

“What I and my colleagues are trying to do is cut the corner. Sending lab samples back to the U.S. from a place that takes a week to get to may not be the most efficient way to do things. So a lot of push has been made for regional or distributed lab capabilities,” explains Skowronski. “I’ve been very involved in this fight, in Africa, Southeast Asia and South America. That push is going to help speed things up a lot.”

The hard work is already paying off in many areas. Distributed DNA sequencing capabilities continue to improve, which allows researchers to determine what strain and what variant of a virus they are confronting, and its origin. “For example, we can now tell if there is a new flare-up of an existing strain versus a new introduction of the disease,” says Skowronski. “And we hope to have the ability to do that analysis in real time, which is critical.”
No Bubble Required
Given all that he knows about the myriad hazards to public health, one might expect Skowronski to be reluctant to leave his house—or at least not without a mask or a hermetically sealed bubble. But he doesn’t let his abundance of knowledge keep him from living. He respects the rigor and integrity of science and its ability to make the world better. After all, Skowronski says, “Science is what keeps us safe.”
Back