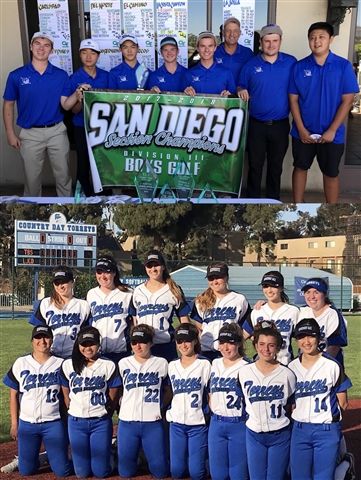 5/16/2018
By Jeff Hutzler, athletic director
Torrey athletes near and far have been making the news. Find out what they’ve been up to!

Torrey Softball is currently undefeated en route to the Coastal League Championship. The team is now in the CIF D.III playoffs and won their opening game on May 15, 6–5 against La Jolla High School.

Congratulations to the Men’s Golf Team who won the CIF D. III Golf Championship on May 16. This is the second CIF golf title in school history and the first since 2011. Kudos to Krando Nishiba ’19 who was named the Coastal League Golfer of the Year and qualified for the SoCal Regionals at the Brookside Country Club in Pasadena on May 24. Krando led the Torreys to a Coastal League record of 7–1 and a league championship, winning the league final with a 69 one under par.
LJCDS Women’s Basketball is graduating four talented seniors, all of whom will play at the collegiate level: Kendal Ellenbeck at UC San Diego, Kiera Oakry at University of San Diego, Jayda Villareal at Cal Poly Pomona and Bianca Notarainni at New York University. As the seniors move on to the next level, Coach Terri Bamford is looking forward to working with rising stars like Bobi Mack ’20. Click here to read about the buzz surrounding Bobi.
Current LJCDS cross country and track standout Lexi Watkins ’18 won the 800 meter and 1500 meter races at the May 10 Coastal League Championships and was named the Track Athlete of the Meet. Lexi will run for Cal State San Luis Obispo next year.
LJCDS fencer Nikita Nair ’20 is quickly becoming the talk of the San Diego fencing community. Click here to read the feature article from www.sdnews.com.
Congratulations to tennis stars Ben Gollin ’18 and Camden French ’22. Ben won five matches without losing a set to reach the final Ojai Junior Tournament, one of the most competitive junior tournaments in the nation, and he took the Coastal League’s singles title. Ben will play for Columbia University next year. Camden won the South Coast Middle School League Singles Championship. Torreys Tennis Team finished the regular season undefeated in league play.
Coach Heppner’s swimmers and divers have enjoyed another successful season. A pair of freshmen has led the way for the women’s team. Diver Lauren Miller ’21 finished the season undefeated in league competition and was invited to dive in the USA Diving Regionals in Wyoming. Taylor Wassel ’21 was honored as a San Diego Union-Tribune Athlete of the Week for her outstanding multi-event performances vs. Mira Mesa and Serra High Schools. Read the complete story in the San Diego Union-Tribune article.
The University of San Diego’s men’s crew team won the Western Sprints Championship powered by former Torrey Football team captain Greg Coffman ’15. The Tritons are headed to the IRA National Championships in Princeton. Read the story here.
Congratulations to former Torrey cross country and track star Julius Diehr ’15 who finished 7th in the steeplechase for the University of Washington at last weekend’s Pac12 Championships.
Former LJCDS tennis standout Andrew Schiffman ’15 had key wins in Rose-Hulman Institute of Technology’s 5-2 win over Earlham College to claim their fourth consecutive Heartland Collegiate Athletic Conference crown. The Fighting Engineers will advance to the NCAA DIII tournament for the fourth straight year. Read the complete story here.
On May 5, former LJCDS football star Josh Church ’13 completed his second Half Ironman Triathlon in St. George, Utah. A Half Ironman covers 70.3 miles; 1.2 miles swim followed by a 56-mile bike ride and a 13.1-mile run.
Former Torrey and current Stanford Baseball star Tommy Edman ’12 is batting .317 while switch-hitting and playing 3rd, shortstop and 2nd base for the AA Springfield (TX) Cardinals. Tommy was recently named a St. Louis Cardinal Top 30 Prospect by Baseball America and MLB.com. Read the article here.
Go Torreys!
Back