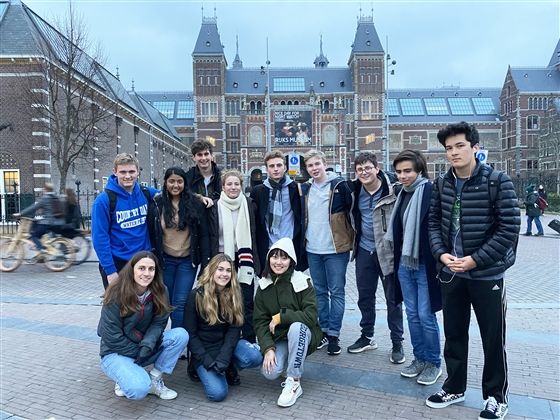 Negotiating in the Netherlands

2/26/2020
By Hannah Jacobs, marketing and communications intern
TorreyMUN traveled to The Hague to create resolutions for real-world problems.

In early 2020, 12 members of the Torrey Model United Nations (TorreyMUN) team traveled to the Netherlands for the most prestigious Model UN conference in the world: The Hague International Model United Nations (THIMUN).
The Hague, Netherlands—a major international center for law and politics, the seat of the Dutch government and home to the Dutch royal family—is the perfect backdrop for THIMUN. THIMUN is a five-day simulation of the United Nations, where participants discuss, debate, negotiate and create resolutions for real-world problems with more than 3,000 students from 200 schools and 100 countries. The overarching conference theme was “Securing Democracy: Every Vote Matters.” TorreyMUN represented the country of Liberia by taking part in discussions of important world problems, such as the Hong Kong protests and maternal health.
THIMUN isn’t merely a simulation. When a resolution passes at THIMUN, it is sent directly to the United Nations to be considered for discussion. TorreyMUN team members showed who they are, what they know, and offered solutions to important world problems by successfully passing multiple resolutions.
Attending this conference has been a dream for the team for the past five years, as participation is by invitation only. The 2019–2020 TorreyMUN team has worked extremely hard to make this dream a reality, not only for them but also for every TorreyMUNer who comes after them. Once a school is accepted into THIMUN, they are invited to participate every year thereafter.
“THIMUN is the most prestigious MUN conference in the world,” says advisor and Upper School humanities educator Fiona Halloran, Ph.D. "To be accepted into its roster of schools required us to demonstrate a sustained, serious commitment to MUN. It was the Class of 2020, who began their MUN careers in the eighth grade, that achieved this goal. They worked for years to practice the skills MUN demands, research global issues and build the team.”
Two students reflected on their experience:
Drew Kagnoff ’23: “One of the most powerful experiences of my life was during our first day in Amsterdam. We had arrived at the Anne Frank Museum, and we were about to begin the tour. We had a 30-minute introduction by a tour guide that left all of us close to tears.” Click here to read Drew’s entire reflection.
Victoria Hu ’20: “Lobbying with students from other countries, I learned more about the different perspectives on the environmental issues in my committee. Strangers are no longer intimidating because we all have the same goal of merging our ideas to a universal resolution. Resisting the idea of sitting back and listening to others, I encouraged myself, again and again, to be confident to use my voice.” Click here to read Victoria’s entire reflection.