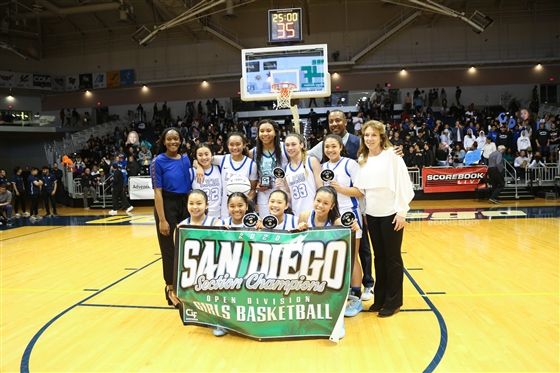 4/20/2020
By Hannah Jacobs, marketing and communications intern
The LJCDS Women's Basketball team completed the best season in LJCDS history.
With a record of 32–1 and the No. 1 ranking in the United States, the 2019–2020 Women’s Basketball team completed a historic season. Led by Coach Terri Bamford, Max Preps’ National Coach of the Year, the team won the 2019–2020 Coastal League Championship and the Open Division CIF Women’s Basketball Championship. They are the first team in any sport to win CIF Open Division title in LJCDS history. The team was also named Cal-Hi’s State Team of the Year, captured the 2020 Southern California Regional Open Division Championship and the Nike Tournament of Champions.
“I had the best season of my life as a coach, and I know the team had the best season in LJCDS history,” says Coach Bamford. “I feel so blessed to have this opportunity to coach this amazing group. I have the best team and coaching staff in the nation!”
The team consists of Jazzy Anousinh ’21, Paris Atchley ’20, Breya Cunningham ’23, Alana Fesili ’22, Bobi Mack ’20, Te-Hina Paopao ’20, Sumayah Sugapong’23, Pua Tufaga ’20 and Destiny Villareal ’22.
Breya and Sumayah were both named in the top ten freshman basketball players in San Diego County by the San Diego County Hoops Report. Breya was named as the No. 1 freshman player in all of San Diego and was named girls basketball Freshman of the Year by Cal-Hi Sports. Jazzy, Te-Hina and Breya were named first-team All-Section CIF.
Te-Hina averaged 22.7 points, eight rebounds, four assists and three steals per game for the season. She is the first female in San Diego history to be named MaxPreps’ California Player of the Year and was the only San Diego girl to be honored by MaxPreps as First-Team All-American this year.
Also named the Gatorade California Player of the Year, Coastal League Player of the Year, Cal-Hi First Team All-State, Cal-Hi Sports Ms. Basketball Player of the Year, Jordan Brand Classic All-American, and CIF San Diego Section Player of the Year, Te-Hina is an unselfish teammate who is more concerned about winning than stats. “I am always ready to do whatever is needed for my team at any time of the game,” says Te-Hina. “Whether it’s to score, rebound or make a defensive stop.”
Te-Hina additionally joins the ranks of only six other San Diego women’s basketball players that have been named McDonald’s All-Americans—three of which played for LJCDS. Past recipients include Candice Wiggins ’04 and Kelsey Plum ’13, who continued on to star in college and the WNBA. ESPN ranked LJCDS No. 4 for the best high schools ever for women's basketball based on alumnae. Now, Te-Hina shares this extraordinary honor and will go on to share her talents at the University of Oregon.
The 2019–2020 women’s basketball team is only the fourth team from the CIF San Diego Section to be named No. 1 in the state, even though their schedule was the toughest one in LJCDS history.
Although the season didn’t end as the team had imagined—LJCDS was scheduled to play against the no. 2 team in the nation for the state title, but the game was canceled due to COVID-19—MaxPreps declared the 2019–2020 Torrey Women’s Basketball team No. 1 due to the strength of their schedule.
“Playing a whole season with my team, and being able to accomplish what we did, it was such an awesome experience to be a part of,” shares Te-Hina. “We had such unique chemistry. We knew all our strengths and weaknesses. I love these girls. It's the best team I've ever played on. I couldn't have wished for a greater season.” (MaxPreps.com).
Back