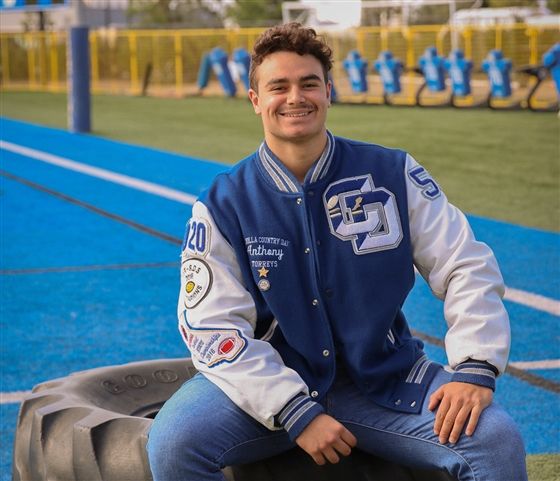 6/5/2020
By Hannah Jacobs, marketing and communications intern
A graduating senior reflects on how LJCDS has allowed him to pursue his passions for design and innovation and football.

Senior Anthony Altala’s passions include both football and STEM. At LJCDS, he has been able to foster and pursue both.
Anthony began playing tackle football against 8- and 9-year-olds when he was only 6 years old. He grew to love the sport even more in high school and credits it for teaching him important lessons on accountability, teamwork and the value of leadership.
During football season at LJCDS, each player is responsible for carrying around a brick with the team’s motto and an important person’s name inscribed on it. Whenever Anthony faced challenges, he would look at his brick dedicated to his grandfather (who passed away during his freshman year) and think of how his grandfather would handle the difficulty.
“The brick by itself is kind of insignificant, but it’s a tangible way to show the impact of a team,” shares Anthony. “On game days, we all bring our bricks up to the field, and we stack them up in a pyramid. We put our dedications facing the field to remind ourselves why we’re playing.”
Football has also been instrumental in the development of his leadership skills. As team captain in the fall 2019 season, Anthony strove to lead by example. “I can’t be a football captain and say to the freshmen, ‘You’re not pushing yourself hard enough,’ if I’m not pushing myself hard enough, doing the drills right and setting a strong example for them to follow,” explains Anthony.
Football also allowed Anthony to develop mental toughness and persistence he not only utilized on the field but also in the classroom. He credits Coach Reaume for helping him develop this important trait. “Whenever I would say something was difficult or hard for me, he would say, ‘Everything difficult that you encounter is a challenge, and it’s a challenge that you got to overcome and find a way to push through,’” shares Anthony. “Having that mental toughness going through high school was really important.”
Aside from football, Anthony is also passionate about STEM. His passion emerged in a seventh and eighth-grade drafting class where he created numerous turn of the 20th-century inventions, one being the telegraph. In Honors Innovation Technology in his sophomore year, Anthony created an RFID system that was tested in the Lower School for a brief period of time. He identified that the system the Lower School was using to sign children in and out was not completely secure, so he created an ID for each parent that, when used, would log the time and who was checking out a child into a spreadsheet. Solving a problem for the school and running real-world trials helped him hone his design and innovation skills.
Anthony is excited to attend college this fall to continue pursuing his passion for STEM. “No one in my family has gone to a four-year university. I didn’t know what the ACT or SAT or any of those things were until I started meeting with my college counselor and writing my college essays. That whole process was new to my family,” shares Anthony. “The biggest thing for me coming to Country Day was the guidance that they provided me with in terms of going to college.”
Anthony will be heading to MIT this fall to play football and study mechanical engineering.