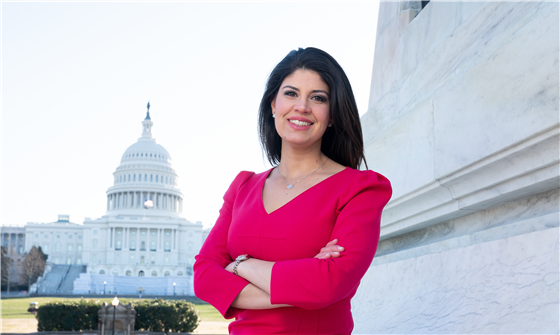 A Passion for Politics

6/19/2020
By Michelle Choate
LJCDS alumna Natalie Brand '02 and her journey to Washington D.C.
News consumption is varied and personal. Some of us are strict about reading the morning paper; others start their evenings with the local news; some will scroll through their social media feeds throughout the day. In today’s climate, the options are seemingly endless, and the news cycle is 24/7. Sources include time-tested traditional networks and newspapers, as well as less established, more informal blogs, tweets and YouTube videos. It’s an understatement to say there are a lot of choices.
Natalie Brand ’02 has spent her career as a reporter striving to be one of those choices, and one that is trusted, balanced and unbiased. For nearly 20 years she has traveled the road of writer and reporter, shining a light on the issues and events of the day. She started young, at the bottom, but her passion for information and educating the public has taken her up and down the West Coast and across the country. Now she’s made it to the epicenter of American government and politics, Washington, D.C., where she currently works as a CBS affiliate news correspondent, providing politically focused reports to the nation.
Learn and move on
Brand is in the major leagues now, but she’s been writing and disseminating the news in various forms since she was a student at LJCDS, as co-editor-in-chief of the yearbook and school newspaper. “I’ve always said some of the hardest academic work I’ve ever done was at LJCDS,” says Brand. “I dabbled in different journalistic paths back then but didn’t know what form I wanted to take. I liked layout from the yearbook, so I was thinking maybe magazine work. I want to extend a special thank you to Mr. [Bruce] Fayman for encouraging me to pursue journalism.” After an internship at the local CBS affiliate, KFMB 8, when she was a freshman at the University of California, San Diego, Brand found her passion for TV news.

The initial internship evolved into a full-time job by Brand’s junior year. She worked as a writer for the morning newscast, then progressed to a producing track. While she found great fulfillment in producing entire newscasts, Brand had always wanted to try reporting in the field.

After graduating from UC San Diego in 2005, she started working at the Palm Springs CBS affiliate, KPSP, as a reporter, where she reveled in being in the trenches. Over her four years in Palm Springs, she reported on topics ranging from devastating wildfires to the presidential funeral of Gerald Ford. Brand then spent two years with Portland, Oregon’s Fox affiliate, KPTV, where she covered the Occupy Portland Movement and composed in-depth reports on the city’s heroin epidemic and sex-trafficking problem. From there, she was off to Phoenix, Arizona, covering issues ranging from the economy to immigration for KTVK. “In my business,” explains Brand, “you keep trying to move up to bigger news markets, which requires moving around a lot.”
Taking time to dig deeper
While in Phoenix, Brand’s passion for covering politics grew. Until that point, she had been a generalist, covering the news of the day, which could have ranged from crime to politics to social movements. Indeed, it was through social movements, like Occupy Portland, that Brand realized she wanted to cover more policy and politics—and the politics behind the policy. Brand went on to earn her Master of Public Administration at the John F. Kennedy School of Government at Harvard University.

“My goal was to be open to different opportunities, but I also wanted to focus on a course narrative that would help me achieve my career goals,” shares Brand. “I took courses on Congress, lawmaking, statistics, polling, government and campaigning. I felt it would change my life if I got into Harvard, and it did.”

Brand also acknowledges the impact of her education in her formative years. “My teachers at LJCDS really helped my writing and gave me a great foundation,” she says. “I remember we did so many different forms of writing in Mr. Boston’s English class: poetry, essays, stories. The things I learned then really helped craft my writing throughout my academic and professional career.”
The promise land of politics
After graduating from Harvard in 2015, Brand’s natural inclination was to head to Washington, D.C. “But when I put ‘Washington’ out into the universe, the other Washington came calling,” she says, as in Washington state. Brand was offered the opportunity to relaunch the political unit at Seattle’s King 5, one of the top local television stations in the nation. Brand’s efforts to revive King 5’s political coverage included getting innovative with campaign coverage and reporting on every election season, from local city council to congressional and statewide races.
She also moderated mayoral, gubernatorial and congressional debates. But her specialty was following the Washington congressional delegation very closely. “Congress is my passion, and I got to tie national stories back to Washington state,” says Brand. Washington is considered a “purple” state, which made covering the 2016 presidential election very enlightening for Brand. “It was an interesting place to cover because the political makeup of the region varies from county to county. You have Seattle, which is a very progressive blue city, but Washington has plenty of pockets of red,” explains Brand.
The story Brand is most proud of from that time—a story for which she was awarded a regional Emmy—was on the changing political landscape of Grays Harbor County, a former timber town about two hours outside of Seattle. In 2016, Brand noticed that this historically blue county had started voting independent and Republican, and she wanted to find out why. “I went out to Grays Harbor and interviewed longshoremen, older men in bars, a historian and other locals.”
The resulting story shined a light on the reasons for the change of politics in Grays Harbor County—and what that meant for the 2016 election cycle. (On election night, that county went red for the first time since 1926 and voted for President Trump.) “Grays Harbor represents one of those counties that was struggling to transition to the new economy and felt left behind and ignored,” explains Brand. “They were hungry for hope. Seattle was thriving, while they were just looking for someone to pay attention and care about them.”
D.C., Finally
In December 2018, Brand took the leap and moved to Washington, D.C., as a freelance reporter. She quickly obtained a full-time position with Newspath at CBS News. “I knew I had to be in D.C., close to the action, especially during this time in our political and social history.”

In her current position, Brand puts together reports for CBS stations nationwide. In addition to the original story, those stations may request Brand to appear for a live shot to conclude the piece and provide additional insights. “I try to localize my reports for the various areas to impart how their senators voted or what they’re saying about a specific topic. So for me, it’s the perfect intersection of state and national news.”

Being in the heart of the action enhances the pressures and challenges presented by the current news climate. The industry has changed, as has the world it reports on.
“I think we are living through an unprecedented political climate,” says Brand. “We’ve never had a primary cycle start as an impeachment trial is still underway. Even though other times have been crazy and scary, the current 24/7 news cycle has fundamentally changed how we cover the news day. It’s always on, and there is information overload at times. We are racing to keep up with the story, and the story can change 50 different times over the course of your shift. The challenge is, how do you keep up with that? How do you stay competitive with other outlets that might have a scoop, but also stay true to the rigors and standards of good journalism?”

These times are keeping Brand busy, and she doesn’t expect to have much free time in 2020 as she covers the presidential election and its aftermath—and whatever unexpected and unprecedented things that will inevitably crop up. But for Brand, it’s always been worth sacrificing her personal time.

“Witnessing history and being able to cover history is what I’ve always loved about my job,” she says. “For now, work-life balance has to be on hold, because the news comes first.”
Back