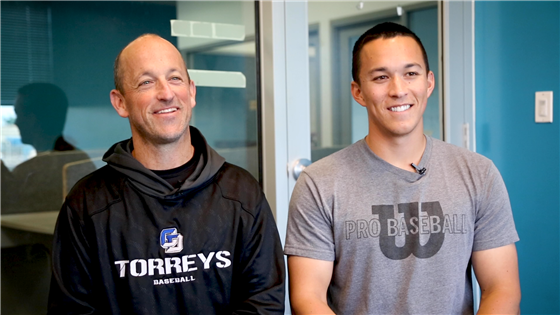 10/14/2020
By Rachel Baxter, digital media and design coordinator
A father-son and teacher-coach-alumnus duo reflects on their LJCDS experience.
La Jolla Country Day School exists to inspire greatness for a better world. We are committed to developing a culture and community of faculty, staff and students who believe in something bigger than themselves. Below, Upper School math educator and head baseball coach John Edman and son Tommy Edman ’13 speak to how they inspire greatness for a better world.

Please note: The footage for this video was shot pre-COVID-19
Greatness can be achieved by actions, both big and small. Greatness is neither luck nor an accident; it is achieved through a process. Our extraordinary educators foster lifelong learners with four critical attributes:

Strong work ethic
Strong moral character
Ability to access and leverage mentors
A desire to challenge the status quo and ask, “what if?” or “why not?”

About John Edman
John Edman joined La Jolla Country Day School in 1998, and he is constantly reinvigorated by the sense of family and camaraderie as faculty and students alike strive to make the world a better place. He loves that students have the chance to experience a wide variety of academic, athletic, artistic and service opportunities while also being encouraged to pursue their passions and become excellent in areas of special importance to them.

Mr. Edman graduated from Williams College with honors, earning a Bachelor of Arts in economics with a concentration in mathematics. After four years of teaching math and coaching baseball at his alma mater, Cranbrook Kingswood, in Michigan, he went on to earn his Master of Science in statistics from the University of Michigan while also serving as an assistant coach for the University of Michigan baseball team. He moved to San Diego in 1999 with his wife and three children, all of whom have been proud lifers at LJCDS.

Mr. Edman’s baseball teams have accumulated 310 wins, first or second place conference finishes in each of the last 8 seasons and a CIF Championship in 2011. Also, 38 of his players have played in college and six have played professionally, including one current major leaguer and one who is currently in Triple-A.

About Tommy Edman
Tommy Edman graduated from La Jolla Country Day School in 2013, where he was an All-Academic Team selection. Tommy, a sixth-round draft pick for the St. Louis Cardinals, was called up to the team from the minors in summer 2019 to fill in for an injured player.