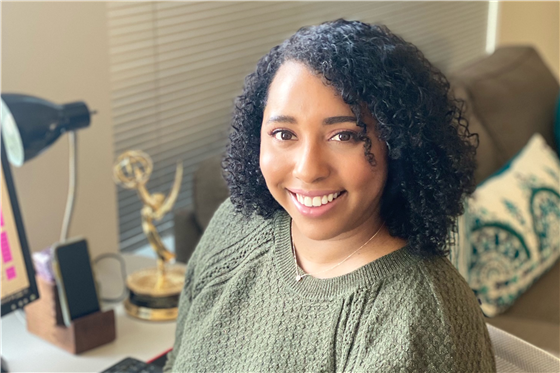 1/21/2021
By Katie Sigeti, philanthropy manager, alumni programs
An alumna combines journalism and community service at NBC Washington.
With the onset of the COVID-19 pandemic and the social and political unrest that has rocked our nation in the last year, the importance of credible and trustworthy news is greater than ever. While national news often gets the spotlight, local news provides communities with critical information pertinent to their lives.

Michelle Rivera Montgomery ’08 has made it her life’s work to help bring timely news and relevant stories to local communities. After graduating from LJCDS, Michelle studied broadcast journalism at San Jose State University. She earned her degree in 2012 and began work as a writer at NBC San Diego. After a year and a half of writing for all shows with particular emphasis on the morning show, Michelle realized her dream of going east. In January 2014, she made the leap to a bigger market and moved to Washington, D.C., where she took a job writing for the morning news at NBC Washington (WRC-TV).

Working from midnight to 9 a.m., Michelle discovered her love for the morning news. “It is an important way to start people’s day,” she explains. During her tenure on the morning news team, they won an Emmy for their coverage of the Washington Capitals’ Stanley Cup win.

Michelle attributes her foundation at LJCDS for guiding her path in college and into her career. “I’ve always been a lover of reading and writing,” Michelle says. “Being forced to look at things in different ways prepared me so much for college.” She credits her Theory of Knowledge class taught by Upper School humanities educator Robin Stewart and her participation in the Student Diversity Leadership Conference as two experiences that particularly shaped her, preparing her for a career in writing as well as the ability to navigate professional environments.

After five years on the morning news, Michelle started producing NBC Washington’s Harris’ Heroes, a community segment spotlighting people and organizations making a difference in the community. She conducted interviews with people doing good work, writing their stories and bringing them to screen once a week. Because of production challenges brought on by the pandemic, Harris’ Heroes is now a smaller segment but continues to air even amid COVID-19. In addition, Michelle works on the 4, 5 and 6 p.m. news shows.

What Michelle finds most rewarding about her work on Harris’ Heroes is the opportunity to give a platform to those people and organizations making an impact and amplifying their mission. Whether it is a segment about scholarCHIPS, an organization that provides scholarships to children of incarcerated individuals, or a piece on Kids in Need Distributors (KIND) that provides weekend meals to children facing food insecurity in Maryland, Harris’ Heroes has brought attention to the incredible work being done in the local community. KIND raised $10,000 over the weekend after their segment aired.

“LJCDS ignited my interest in journalism,” shares Michelle. “After returning from a community service trip to Nicaragua, we were interviewed by a local community television station. I was so fascinated with the entire process—I knew then I wanted to explore journalism. My time at LJCDS taught me that everyone you meet has a story that deserves to be explored. And I use that lesson every day when I’m writing stories.”