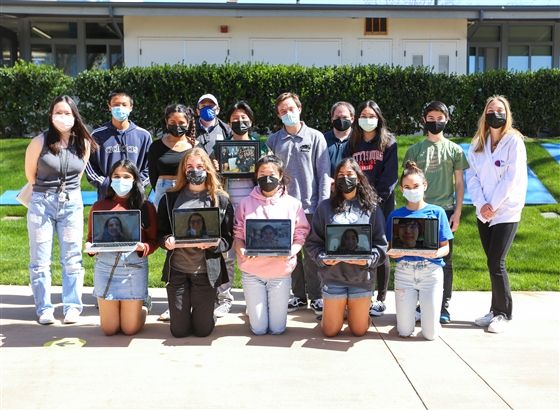 3/24/2021
By Jonathan Shulman, Upper School history educator, director of the Center for Excellence in Citizenship
The success of Torrey Mock Trial over the last 11 years.
It’s been a year of firsts for Torrey Mock Trial (TMT). They won their first San Diego County High School Mock Trial Competition in February against 27 other teams, which qualified them to compete in their first California State Championship in March—both virtual competitions.
On the evening of February 24, 2021, Torrey Mock Trial celebrated its first San Diego County Championship with a victory over Westview High School while bringing home an unprecedented nine individual awards for best attorneys, best witnesses and best bailiff. This was an accomplishment many years in the making.
The highlights of TMT’s 2021 California State Championships experience included a win by three points (495-492) against last year’s New York Empire World Champions, Venture Academy, in what was the final, and arguably the best, mock trial round ever from the seniors of the Class of 2021.
Over the previous eight seasons, TMT varsity has ratcheted up wins in 32 of their 35 county matches, including 24 of 25 matches since 2016 and an undefeated 10-match streak from 2020 to 2021. TMT is the biggest mock trial program in the county, with a competitive junior varsity team that has participated in the last four county tournaments and a Middle School elective for budding young legal minds. And LJCDS is the only team in San Diego that can lay claim to have ranked in the top three (of roughly 30 teams) in each of the last eight years.

Mock trial at LJCDS started on an October day in 2010 when junior Aaron Mak ’12 approached English teacher Glen Pritzker on the steps of the amphitheater to express his interest in building a mock trial program. After winter break, a crew of individuals ranging from freshmen to seniors emerged to compete at the San Diego County Mock Trial Competition. Finishing in ninth place out of 13 teams and picking up individual awards for Best Bailiff and Best Witness, Torrey Mock Trial was born.
Eleven years later, LJCDS’ mock trial program is feared and respected throughout the State of California. The credit goes to every student, attorney-coach, teacher-coach, parent and alum who has given their blood, sweat and innumerable tears to competing in the present and building a legacy for the future.
Hundreds of students have exclaimed “GO TMT!”—a cheer that only the late Mr. Pritzker’s enthusiasm could truly illuminate, and which continues to ring in our ears years after our loss of Mr. Pritzker to cancer in August 2016.
Ask any TMT member and you’ll hear the mantra, “Mock Trial is a speaking competition with a legal aspect.”
The season begins when a casebook arrives in mid-September from the Constitutional Rights Foundation, containing a collection of court decisions on a constitutional question, a statement of the facts of the case, a summary of the charges against the defendant, and affidavits of eight witnesses. From there, it’s up to the students playing the roles of attorneys, witnesses, clerks and bailiffs to build an argument for and against conviction through trial and error. And as a team, they tell a compelling story to the jury in just 14 minutes amid a flurry of objections from opposing counsel. Much like how each player’s individual decisions on the offensive and defensive lines of a football team are crucial to the success of the whole, mock trial is truly a team sport. Just with fewer concussions.
As encouraging and exciting as those wins have been, the true victories are the ones we live in every team meeting, attorney-witness practice, scrimmage and cherished moment we share as a team. For every one of the half-dozen TMT veterans currently in law school, there are dozens more who apply the critical thinking and dramatic improvisation skills they learned in mock trial to their college education, careers and community engagement.
Aaron Mak and the late Glen Pritzker set the wheels of justice in motion, and as the 2021 seniors hand over leadership of this storied franchise to next year’s seniors, the Torrey Mock Trial tradition is sustained.