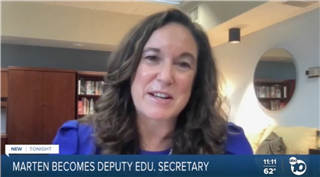 5/12/2021
By Emilyn Edquilang, administrative assistant
Cindy Marten '84 was confirmed by the U.S. Senate on May 11, 2021.
The following is an excerpt from the ABC 10News San Diego article, "SDUSD Superintendent Cindy Marten confirmed as U.S. Deputy Education Secretary":

Once Marten is sworn into office, she will assume the federal post after more than three decades as an educator in San Diego, including eight years as superintendent of SDUSD.

"My message to students has always been, `Work hard. Be kind. Dream big,' Marten said. "The students of San Diego Unified have lived up to that challenge beyond anything I could have imagined as a young principal in City Heights, or even as the superintendent of the second-largest school district in California. National education leaders have recognized the gains our students are making."

In 2019, San Diego Unified seniors achieved the highest graduation rate among big-city districts in California. District elementary students and middle schoolers, that same year, outperformed the average of their peers in both math and reading.
Click here to read the full story.