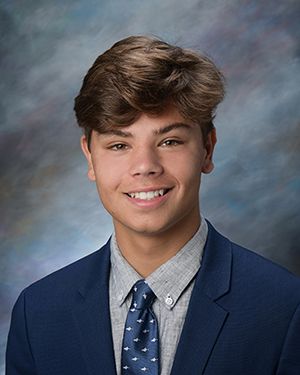 5/18/2021
By Jennifer Fogarty, communications content manager
A Lifer makes the most of his 15 years at LJCDS as a scholar, artist and athlete of character.

As a Lifer who joined LJCDS at 3 years old, Raymond "RJ" Parry ’21 has taken advantage of all the opportunities LJCDS has offered. His passions lie in the arts and athletics, and he’s learned how to juggle it all—all while being a kind, empathetic student.
“I’m amazed at the opportunities La Jolla Country Day School provides,” RJ shares. “You can be a varsity athlete, and you can also be in the musical, and you can do these other things you’re interested in. There is more freedom these last four years [in Upper School], and I really wanted to take advantage of it by pushing myself into other genres and trying new things.”
RJ created personal goals coming into high school: in academics, focus on homework; in the arts, try out for the musical; and in athletics, make varsity on a new sport.
Arts
RJ’s arts involvement started in Lower School. “We sang in Lower School and did a play,” he shares. “I loved it so much that in Middle School, I signed up for the theater program and acted and sang in The Lion King Jr. I practiced my lines and sang in the car with my sister, and I got the part of Simba. That was big for me, and I loved it.” He’s also a member of the Tri-M Music Honor Society and won the Keith Heldman Music Award in eighth grade in recognition of his hard work and excellence in music.
In Upper School, RJ continued to feed his passions and honed his skills in both music and theater. He was a member of the concert choir then earned a position in the audition-only choral group, the Madrigals, before becoming its president in his senior year. In freshman and sophomore year, he was on the cast of the Upper School musicals, Anything Goes and Les Misérables, respectively.
Athletics
At four years old, RJ started ice skating, which led to ice hockey, and then football, lacrosse, cross country and soccer. His optimistic influence was recognized when he won the Positive Teammate Award in eighth grade. He shares, “No matter what sport I play, I try my hardest to stay passionate and tenacious.”
After running all summer with his mom, RJ qualified to be on the cross country varsity team, fulfilling another goal. “I’m most proud of running the Mt. SAC race,” he shares. “It's probably the hardest race I’ve ever run, and I definitely still have some dirt in my throat. I had to really, really push myself and be motivated, and I was really proud that I finished.” Hosted by Mt. San Antonio College since 1948, the Mt. SAC Cross Country Invitational boasts a legendary difficult three-mile course with more than 23,000 athletes representing over 500 schools.
Mentors
Universally loved by teachers and coaches, RJ is overwhelmingly described as a kind, passionate, hard-working student with a great sense of humor. The admiration is mutual as he reminisced about a list of teachers he considers mentors and who have shaped who he is today. Being at the same school for 15 years means he still sees these profound influences on his life and memories of experiences come flooding back every time he walks around campus to the other two divisions.

“I think that the school does a really good job of setting people up for success. From nursery up to high school, it’s the simple exposure like singing and dancing in Lower School. And if you want to continue, there are opportunities available. And everyone plays a sport in Middle School, and you have a chance to continue or find something else you like. Of course, I’m a little biased, but I love it,” he says.

RJ plans to play soccer and be involved with choir and theater while studying finance at the University of San Diego in fall 2021.
Back