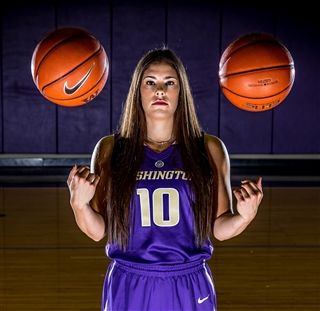 Alumna Qualifies for the Olympics

6/4/2021
By Emilyn Edquilang, administrative assistant
Kelsey Plum ’13 is part of the first 3X3 basketball team heading to the 2020 Olympics in Tokyo, Japan.

The following is an excerpt from the CBS News 8 article, “San Diego's Kelsey Plum is top scorer as U.S. Women's 3x3 basketball team qualifies for Olympics”:

"We're just really excited," Plum said. "I love this team and we have a lot of fun."

The U.S. opened the game by outscoring Spain 6-2. Spain cut the deficit to 7-6. The U.S. responded by scoring six unanswered points for a 13-6 lead and led by at least four for the rest of the game.

The U.S. defeated Belarus, 21-13, in a quarterfinal earlier Sunday, with Plum scoring a game-high seven points.

"I think the biggest overall thing for both games, which is what (coach) Kara (Lawson) has always emphasized, is at the end of the day, it is our pace that helps us win," Plum said. "We continue to find a way to win, and it was really cool to see that happen, especially in the Spain game, because it was pretty close, it was back and forth."

Plum was the U.S.' leading scorer in the tournament, averaging 5.3 points in six games, all victories.