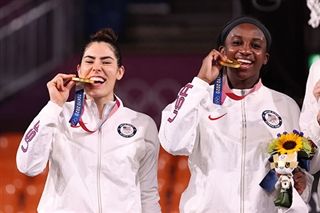 8/3/2021
By Emilyn Edquilang, administrative assistant
Kelsey Plum ’13 wins gold at the 2020 Olympic Games in Tokyo, Japan.
Kelsey competed for Team USA in the first-ever women’s 3x3 basketball summer Olympics event. The U.S. team went up against Russia in the finals and won 18–15 to take the gold.

The U.S. women’s 3x3 basketball team qualified for the Olympics during the FIBA 3x3 Olympic Qualifying Tournament in Graz, Austria, on May 26–30, 2021. They won all six of their games, and Kelsey was the highest scorer for the U.S. with an average of 5.3 points per game. The yearlong delay to the Olympic games gave Kelsey time to recuperate from surgery on a torn Achilles tendon.

LJCDS Women’s Basketball Head Coach Terri Bamford, who coached Kelsey during her time at LJCDS, described Kelsey as a player: “Her skill set and ability to score is one thing, but then she’s a great teammate, she’s coachable. She’s disciplined and works out on her own. She outworks everyone and always has.”
Kelsey currently plays professionally for the Las Vegas Aces of the Women's National Basketball Association.

Photo by Christian Petersen/Getty Images
Back