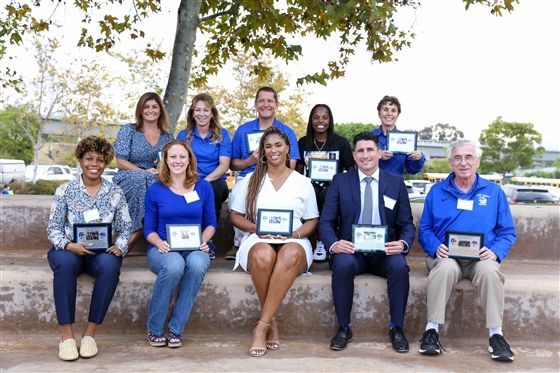 10/1/2021
By Robert Grasso, assistant director of athletics and physical education
Star players and treasured coaches are inducted at the 2021 Hall of Fame ceremony.

Alumni and coaches returned to campus on September 24 to be honored at the LJCDS Athletic Hall of Fame induction ceremony and Homecoming. The 2021 inductees are Jerry Fleischhacker, Diego Rovira ’00, Lauren Swigart ’03 and the 2001–2002 Women’s Basketball team.

Jerry Fleischhacker was a beloved soccer coach and history educator for 29 years. “Coach Fly” did not miss any of the 704 games played by his teams between 1991 and 2020. His teams had a record of 364-215-125, making him the winningest soccer coach in school history. Under his leadership, men’s varsity soccer won five Coastal League championships and two California Interscholastic Federation (CIF) championships. Coach Fleischhacker served as a positive mentor to his players on and off the field. “I’ve played soccer my whole life and had many coaches, but none like Fly,” shares Diego Rovira ’00. “He cared so much about the players and the team. It was never about winning (though he liked winning); it was all about the journey in helping us grow up and become better people.” Zack Wolfenzon ’09 adds, “Everyone who’s taken a class with Fly comes out a better student. Everyone who’s played for Fly comes out as a better soccer player. Everyone who’s had a chance to know Fly is ever grateful to have him as a coach, teacher, mentor and friend.”

Coach Fleischhacker will be inducted as a 2021 San Diego Coaching Legend by the San Diego Hall of Champions in November.

Diego Rovira ’00 is one of the greatest soccer players in LJCDS history. He was a talented left-footed midfielder who played from 1996 to 2000 and finished his LJCDS soccer career as the all-time leading scorer at the time. Diego’s head coach, Jerry Fleischhacker, described him as “a fine young man and team leader who did a great job teaching the seven freshmen about team attitude. Those seven freshmen went on to win a CIF title and were then mentors to the new freshmen.” Diego was named First Team All-Coastal League three times and First Team All-CIF as a senior. In addition to excelling on the field, he was a three-time member of the academic honor roll and was part of a high school All-Academic team selected by The San Diego Union-Tribune. Diego became an honorable mention All-WCC (West Coast Conference) player at Saint Mary's College of California. He then had a tremendous professional career with the San Diego Sockers. In the 2010–2011 season, Diego scored 19 goals in 15 games for the Sockers and was named Second Team All-PASL (Professional Arena Soccer League).

Lauren Swigart ’03 was a cross country and track and field star from 1999 to 2003. She led three cross country teams to both Coastal League and CIF championships. She also led three teams to impressive finishes in the state championships. Lauren was a top-five finisher in both the Coastal Conference and CIF during all four seasons. She was the Division IV individual CIF champion in 2001 and 2002. Lauren was named All-Coastal Conference and team MVP all four of her cross country seasons and was a four-time All-Academic selection by The San Diego Union-Tribune. She led the Torreys to three Coastal Conference Championships and was a three-time CIF finalist in track and field. Lauren went on to run both cross country and track and field at Santa Clara University. She was named first-team All-WCC in cross country in both 2003 and 2006 and was a WCC All-Academic selection. Beyond college, Lauren continued her running and competed in Ironman Triathlons and ultra-marathons. She now lives in the mountains of Colorado and has climbed all of its 58 peaks over 14,000 ft.