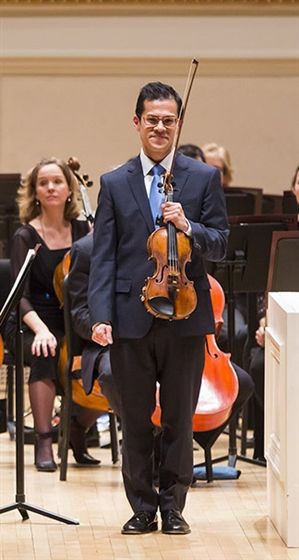 A Harmonious Return to San Diego

2/14/2022
By Katie Sigeti ’06, philanthropy manager, alumni programs
David Chan ’91 is in his 22nd year as a concertmaster of the Metropolitan Opera Orchestra.
While he resides in New York, San Diego will always have a special place in his heart. In 2020, Chan reestablished his connection with Mainly Mozart, a San Diego–founded classical music nonprofit organization.

Mainly Mozart brings together concertmasters and principal players from around the nation to perform in the largest gathering of its kind in North America. During his senior year at LJCDS, Chan performed in one of Mainly Mozart Youth Orchestra’s chamber music concerts. Now, the Del Mar native serves in a variety of roles as co-artistic partner.

In fall 2020, Chan performed with the organization for the first time as a professional in the Mainly Mozart Festival Orchestra Drive-in Concert Series held at the Del Mar Fairgrounds. Then he returned to San Diego for Mainly Mozart’s Festival of Orchestras as conductor, concertmaster and featured soloist in winter and spring 2021.

On September 11, 2021, Chan conducted the Mainly Mozart All-Star Orchestra at the Del Mar Surf Cup Sports Park. In partnership with the National Conflict Resolution Center (NCRC), Mainly Mozart presented a special benefit concert, “A Path Forward,” to commemorate the 20th anniversary of 9/11. The event raised funds and brought awareness to NCRC’s mission to overcome hatred, intolerance and incivility while ensuring the heroes and victims are not forgotten. Chan led the orchestra in a performance of Mozart’s overture to “The Marriage of Figaro.”

While in San Diego, Chan also visited the LJCDS campus and met with Upper School strings classes to share a few of his pieces and listen to the students’ work.

Photo by Chris Lee
Back