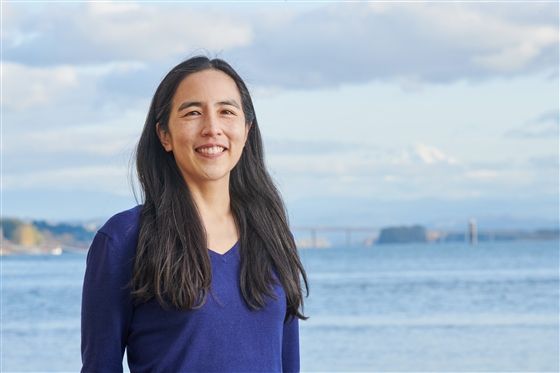 2/14/2022
By Tiffany Truong, director of marketing and communications
Jocelyn Lin Drugan ’98 is sustaining a healthy community on land and under the sea.
Every day the world depends on the ocean for its resources—the oxygen we breathe, the food that nourishes us, transport of goods and services, revenue from coastal tourism and numerous jobs. According to the United Nations, more than 3 billion people depend on marine and coastal biodiversity for their livelihoods. The ocean’s global economic value is estimated at $3 trillion per year, and marine fisheries employ more than 200 million people. But overfishing, pollution, waste and other harmful human activities are disrupting the oceanic ecosystem.

Jocelyn Lin Drugan ’98 believes that restoring the ocean’s health is vital not only for saving marine life but also the livelihoods of some of the most vulnerable communities around the world. As the analytics team director and senior fisheries scientist at the nonprofit organization Ocean Outcomes (O2), she works directly with the seafood industry to help fisheries and their supply chains become more sustainable.

Drugan’s work focuses on economic, social and environmental sustainability. “At a fundamental level, it’s about managing the fishery resource in a way that keeps it going so that you don’t take too many fish and the population can keep reproducing and stay healthy,” she says. “Monitoring the fish stocks to see how they’re doing. Are they healthy or not? That’s usually determined with stock assessments and data collection.”

The Path to Fish Science

After graduating from La Jolla Country Day School, Drugan earned her bachelor’s in ecology and evolutionary biology from Yale University. She then embarked on a laser-focused journey studying fish. During a yearlong Fulbright Fellowship in Japan, Drugan visited fish markets and tuna aquaculture facilities to study tuna sashimi production. As a Ph.D. student at the University of Washington’s School of Aquatic and Fishery Sciences, she studied the evolution and genetic population structure of wild Pacific salmon. Then in her post-doctoral position at the National Oceanic and Atmospheric Administration, Drugan developed a genetic simulation model to help confirm oceanographic models of larval fish dispersal at their Alaska Fisheries Science Center.

While serving as a salmon management analyst at the Wild Salmon Center, Drugan uncovered a need to support sustainable fishery practices beyond salmon. “The Wild Salmon Center is mainly focused on conserving what they would call ‘salmon strongholds,’ places where the environment is relatively pristine, and helping keep their salmon populations healthy,” she says. “I was also working on the sustainable seafood side within a group there. While we were working with salmon fisheries in Russia, we recognized a huge demand for sustainable seafood and insufficient supply to meet that demand.” So, rather than wait for someone else to solve the problem, in 2015, Drugan and a group of passionate colleagues founded O2.

Leading with Passion
Today, her current role combines the best of her education, experience and passions. While a critical part of her job involves providing technical expertise drawing on her fisheries science background, Drugan also works directly with people in the field—those who are contributing to their community’s nutrition, food security, sustainable livelihoods and poverty alleviation. She explains, “When I start a fishery project, I typically begin with an assessment and evaluation. It’s a lot of talking to people and learning about their fishery.”

Ocean Outcomes supports large- and small-scale fisheries, but small artisanal fisheries hold a special place in Drugan’s heart. “Smaller-scale fisheries are essential because they provide many local communities with food security and jobs,” says Drugan. “Stereotypically, people believe a lot of fisheries are operated by men. However, women are instrumental in the sector, too. Often, they may be more involved in selling or processing.”

The Food and Agriculture Organization (FAO) of the United Nations named 2022 the International Year of Artisanal Fisheries and Aquaculture. “It is the year of supporting small-scale fisheries,” shares Drugan. “Fisheries support a lot of people. These smaller-scale fisheries might not have political or economic power to leverage. I think it’s important to support them. Trying to help them keep their livelihoods going is one of those big challenges, especially when there’s substantial competition among sectors.”

Global Obstacles From Mexico to Costa Rica to China to Japan, each country grapples with its own challenges as they strive to restore our oceans and manage the current impact of climate change on fish stocks. “Sometimes fishing rights are determined by historical patterns of where fish have been caught and what quantities have been caught,” says Drugan. “As water temperatures change, the distributions of fish are shifting, for example moving poleward where the water’s colder.”

In Guyana, Drugan works with local groups to raise awareness about sustainable fishery management practices. “The capacity for management is notably more limited here,” she shares. “Most of the fish stocks are not being assessed. Although the local people eat a lot of fish, they don’t think of themselves as major seafood consumers like in Japan, where there’s a lot of pride about eating seafood. There’s considerable room to raise awareness. They are also contending with oil exploration coming up at the same time. In a way, it’s an opportune time to be able to look at how the fish are doing before oil development gets settled there because that may have environmental impacts on those fish populations.”

Environmental sustainability cannot come at a tremendous financial cost for fisheries; therefore, the balance of short- and long-term outcomes is critical. “When you encourage environmental sustainability, there might be short-term costs like a need to invest in gear with less bycatch, or even reducing catches,” Drugan shares. “To help financially support those investments, sometimes you need outside investment. The goal is that the fishers themselves receive some benefit from doing this because they should not have to bear all the cost and hassle of trying to improve fishing practices on their own.”

In partnership with the organization ABALOBI, Drugan and team developed an action plan for sustainable practices in a wild capture yellowtail fishery in South Africa that includes opportunities for fishers to obtain better market prices for their fish. “We think about how to improve the handling and distribution practices,” she says. “What’s the quality of fish as you’re catching it and then transporting it? If you can improve that quality, sometimes you can find buyers willing to pay more for higher-quality fish. Also, a lot of times those buyers might be interested in environmental sustainability and the story of how those fish came to market.”

In Japan, the aging workforce in the fishing community is posing a challenge for the industry. As fishers are getting older and retiring, fisheries aren’t attracting enough young people to replace those retiring. “It’s hard to make a living,” Drugan shares. “There’s not a huge incentive for young people to stay in that kind of job.”

This challenge makes it vital to optimize opportunities for young fishers to thrive. Drugan and the teams at O2, Seafood Legacy, and UMITO Partners in Tokyo led a multi-year fishery improvement project plan for a giant octopus fishery in Hokkaido, Japan. “We worked with a young fisher who just wanted to keep his town going. He sought out Ocean Outcomes, which is really inspirational. Octopuses are interesting because they often tend to stay in one place. They have their home territories. In this case, we worked with the management agencies to execute a robust evaluation of how healthy those populations were.”

Drugan, who oversaw the technical aspects of the fishery improvement project, worked with stakeholders to develop a precautionary harvest strategy. The plan also included generating domestic and international interest and investment in the region’s fisheries and seafood industry 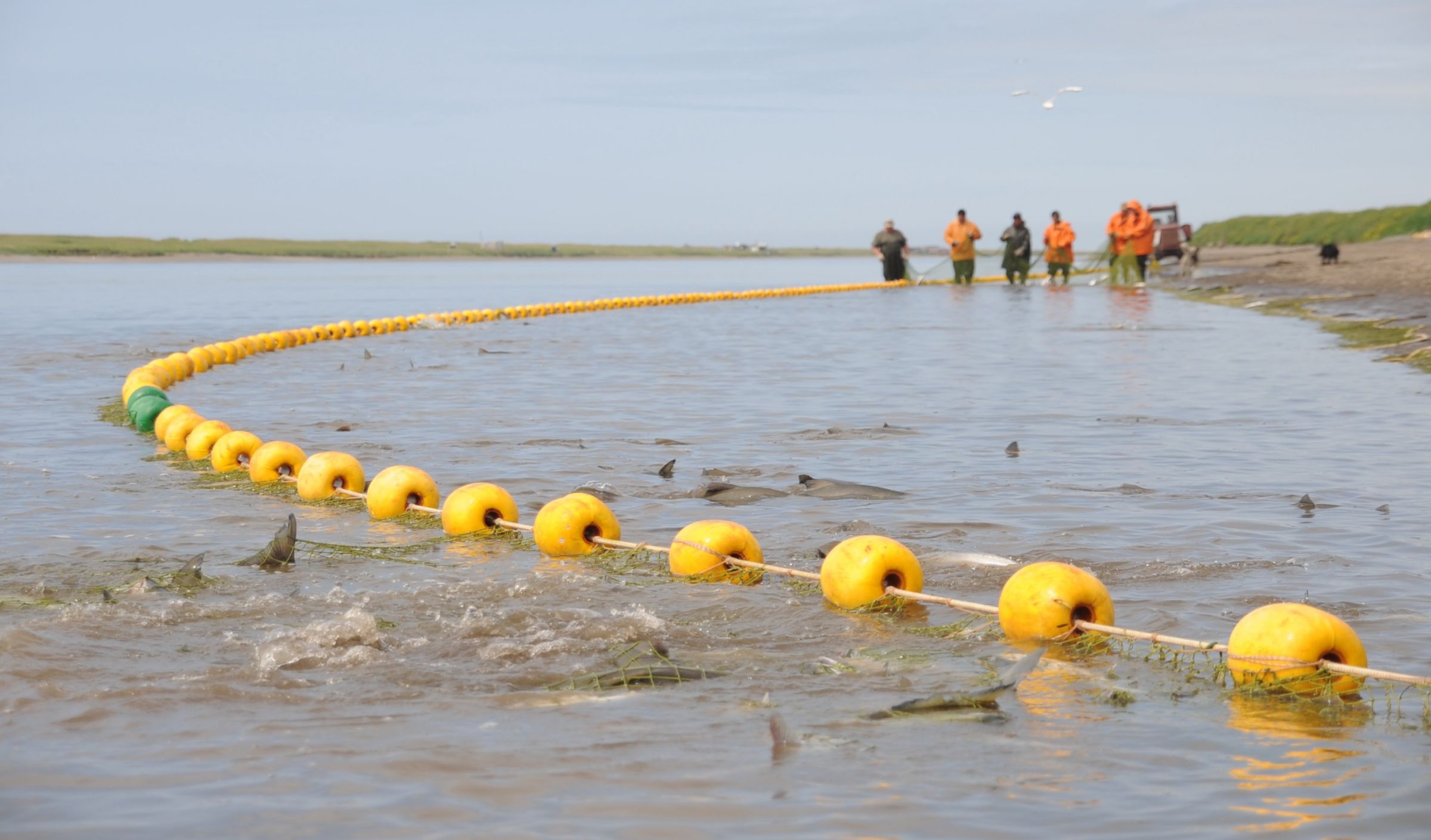 Local communities rely on healthy fish populations, such as the salmon fishers
in Kamchatka, Russia. (Photo by Denis Semenov)

In the United States, O2 is working with Native American tribes in Maine on aquaculture projects. “One of the tribes we’re working with has been raising brook trout, which are a native species in the area, and another is committed to Atlantic salmon restoration,” Drugan shares. “They want to use those programs to help feed the tribe and the local community, but they want to figure out how to do it sustainably, both environmentally and financially.”

Native American communities have historically faced significant inequity and health disparities, leading to great social and economic disadvantages. “Equity is one of the bigger issues that comes up. Historical discrimination and loss of resources have had long-lasting impacts,” Drugan explains. “The food sovereignty aspect is very important to them. While it’s a work in progress, I am really excited about this partnership.”

The narrative around sustainability inevitably is tangled with politics and consumer behavior. Much of Drugan’s work involves the government as a stakeholder. “With regimes or political parties and individuals, momentum can be lost for a lot of the things that you’re trying to do, especially when it comes to longer-term management of fisheries,” she shares. “Politics and trade, especially in China, impact the work itself. Some of the projects we do are industry-funded, but when a tariff comes in, and they lose that income from, for example, crab exports to China, that affects their ability to fund the work.”

For consumers, social media has raised awareness about plastics and the way they damage the ocean. Most notably, the anti-plastic-straw movement ignited behavior change and bans of single-use plastic straws in many restaurants. But what can consumers do when it comes to eating seafood? Drugan recommends making intentional choices. “In general, you should be thoughtful about what kind of seafood you purchase. The Monterey Bay Aquarium Seafood Watch program has a seafood guide that classifies species as red-, yellow- and green-rated, which gives you some sense of your choices. Additionally, I think trying to buy locally and learning where the fish is coming from makes a difference.”

Igniting a Path for Curiosity and Learning

Drugan is a lifer who attended LJCDS starting in kindergarten. “I was on the quiet and studious side,” she shares. “What I think was special about Country Day was even as a quiet student, the teachers were so great and supportive. The teachers and staff at Country Day instilled in me a deep appreciation for learning across disciplines, from reading with Susan Middleton and writing with Chris Schuck to history with Richard Nelson and Doc Stevenson, science with Tom Perrotti and art with Marsha Boston. They fostered an environment that built both my self-confidence and awareness that there’s always more to learn.”
It’s About Serving and Supporting People and the Environment

“Taking an authentic interest in people is something I think I learned while I was at Country Day and something that I sincerely appreciate and still try to practice in the work I do now,” shares Drugan.

“I care deeply about animals, including fish, and the environment,” she shares. “However, in my work, it’s so much about the people. The fish are important, don’t get me wrong. But you need to have community interest and engagement and support to make progress on the environmental sustainability side of things. It’s really neat to work with people who have all sorts of challenges and try to learn their perspectives along the way and really listen to them. Fishers work so hard. This work is hard. It takes a long time to do, and there’s not usually some flashy return on investment. But in the end, it is really rewarding work.”
Featured photo by Joseph Eastburn
Back