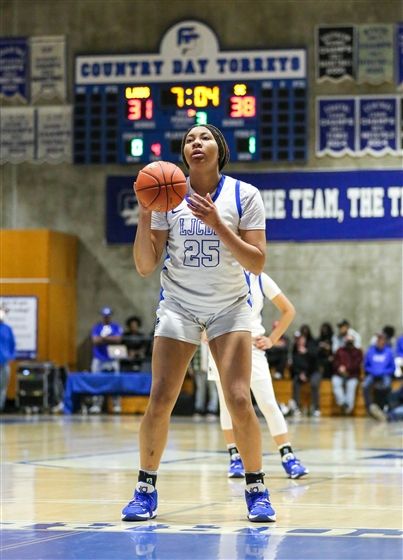 4/11/2022
By Emilyn Edquilang, administrative assistant
Honors include naming Breya Cunningham '23 as Player of the Year and Terri Bamford as Coach of the Year.
The following is an excerpt from The San Diego Union-Tribune article, “San Diego Section winter All-CIF teams.”

Girls Basketball
Player of the Year
Breya Cunningham '23
A junior, Cunningham averaged 18.4 points and 11.4 rebounds a game for the 25-3 Torreys, the San Diego Section Open Division champions. She had a season-high 37 points against St. Mary’s of Stockton and grabbed a season-high 16 rebounds against Gardena Serra and Corona Centennial. The 6-foot-4 Cunningham scored 15 points and had 13 rebounds in the San Diego Section Open Division title game against Mission Hills. She followed that with 20 points and 8 rebounds in a SoCal Regional win over Santa Ana Mater Dei and had 23 points and 13 rebounds in a loss to eventual state champion Chatsworth Sierra Canyon.

Coach of the Year
Terri Bamford
From the La Jolla Light article, "The Torreys went 25-3 overall this season and won their seventh straight Coastal League championship before losing in the semifinals of the CIF Southern California regional tournament."

Read the story featured in The San Diego Union-Tribune and La Jolla Light.