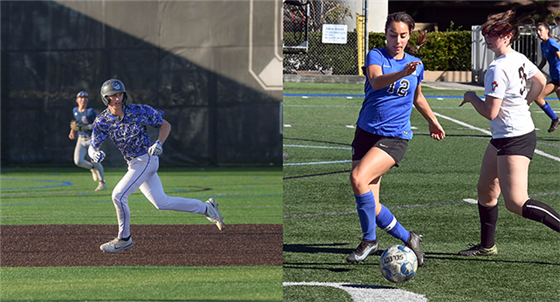 Student-Athletes of the Year

5/25/2022
By Jennifer Fogarty, communications content manager
LJCDS student-athletes win Coastal Conference awards.
Congratulations to Johnny Luetzow ’22 and Tara Jessen ’22 who were named LJCDS Student-Athletes of the Year and were recognized by the San Diego High School Sports Association. Students are chosen based on their academic records, athletic achievements, community service and character. Of the hundreds of eligible scholar-athletes in San Diego County, Tara was named the Coastal Conference Female Scholar-Athlete of the Year, and for the second year in a row, Johnny was named the Coastal League Baseball Player of the Year.
Tara Jessen’s passion for soccer, art, STEM and serving others helps her excel as a scholar, athlete, artist and service-learning student. During her four years as varsity soccer team captain, Tara led the team in scoring for three years, led the team to the CIF D3 Playoffs this year and was named First Team All-Coastal League. Read more in the La Jolla Light Athlete of the Week article.
“Her ability to lead a team in a calm and steady way, in addition to her good nature and tremendous talent, has been a huge part of the team’s success,” shares soccer coach Brie Benson. “On and off the field, she’s a wonderful role model for the community.”
With a rigorous course load of six AP and eight honors courses, Tara earned a 4.53 GPA, made the High Honor roll all four years and is a member of the Cum Laude Society. She holds a leadership role in the National Art Honor Society, and her work was featured at the San Diego Museum of Contemporary Art. In giving back to the school and the community, she created art projects for LJCDS kindergarteners and first graders, and volunteers coaching local youth soccer players. Tara is interested in biomedical engineering and will attend the University of California, Davis in the fall.
Johnny Luetzow is a star baseball player who juggles schoolwork and community service to shine as a student-athlete. His varsity baseball career started when he filled in for an injured catcher as a freshman. His leadership and talent have been integral to the team’s success ever since. As a junior, Johnny was named First-Team All-Coastal League and team MVP. A two-year team captain, Johnny sits among the career leaders in many offensive categories and leads all of San Diego in single-season stolen bases. Along with teammate Jake Bold ’22, Johnny was selected as one of the CIF San Diego Section’s best players to play in the Padres High School All-Star game at Petco Park in June.
“His combined enthusiasm, can-do attitude, natural physical gifts and a love of baseball make him one of the finest young men I have had the pleasure of coaching in my 29-year career,” shares baseball coach John Edman. “He is an extraordinary catcher and third baseman and can play any position on the field.”
Off the field, Johnny’s a dedicated and hard-working student earning a 4.4 GPA. He has been on the High Honor roll all four years and is a member of the Cum Laude Society. As co-leader of the Jungle, Johnny builds community by encouraging Torrey spirit and engaging his classmates. He is a member of the National League of Young Men and has won two presidential service awards for his work with Miracle League, the Autism Tree Project and Adaptive Sport. Johnny will play baseball at Santa Clara in the fall.