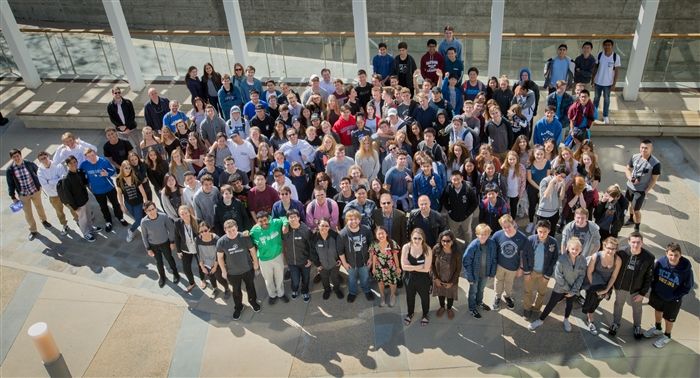 Using Advancing Technology to Preserve the Past

2/8/2017
By Communications
On Tuesday, January 31, the entire freshman class and students in computer science, robotics and AP World History visited the Center for Cyber-Archaeology & Sustainability (CCAS) at UC San Diego Qualcomm Institute. As stated on their website, “cyber-archaeology is “the marriage of archaeology, computer science, engineering, and the natural sciences,” which provides “21st-century solutions to safeguard the past for future generations.”
The day started with a talk by the Director of the UC San Diego Division of the California Institute for Telecommunications and Information Technology, Ramesh R. Rao, who shared a new project his team is working on: the wireless brain modem. He encouraged students to keep asking questions and using their imagination. “Human imagination is our greatest resource,” he says. Distinguished Professor, Principal Investigator and Director of the Cyber-archaeology research group at the Qualcomm Institute Tom E. Levy spoke about the At-Risk World Cultural Heritage and the Digital Humanities project, where they’re taking new approaches to digital data capture, curation, analyses and dissemination.
The group of nearly 200 students and faculty members divided into four groups and rotated through a tour of four stations. The first stop was in the Vroom, where graduate and undergraduate students presented information on current research and the tools they use to record excavations and store data. The second stop was the WAVE (Wide Angle Virtual Environment) room that consisted of 35 TV screens powered by 18 gaming PCs with 20 terabytes of storage. With 3D glasses on, students immersed themselves inside the Mayan temple on the screens. The Caves were the third stop and consisted of 3D immersive visualization areas with footage from the Temple of Apollo, Luxor in Egypt, and Mayan tunnels in Guatemala. The Caves cost $2 million to build eight years ago and $200 an hour to run now. The final stop brought the group to the Auditorium lobby with HTC Vices and Oculus tables, where students experienced virtual reality archaeological sites from around the world and interacted with a drone.
Thank you to our host, Dr. Tom Levy, and board member Anthony Potamianos P’20, for making this possible. See more photos here.