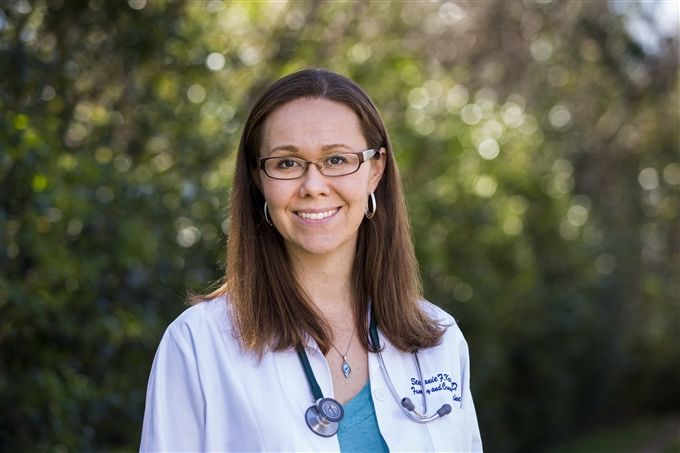 A Big-Picture Doctor—with a Big Heart

10/4/2017
By Wendy Simard
Tucked away in the Florida Panhandle, you’ll find a small city named Quincy, with a population of 7,000. A 12-minute drive to the Georgia border and an hour from the Alabama border, Quincy is home to a Walmart Supercenter and a handful of so-called Coca-Cola millionaires (folks who bought stock in the company early and struck it rich). Part of Gadsden County, Quincy feels worlds away from the typical idea of Florida.
Gadsden County is one of the poorest in the state, ranked near the bottom of all Florida counties when it comes to health care, education, income levels and other benchmarks of growth. There are no obstetricians, pediatricians, psychiatrists or specialists in the county—but there is a clinic.

This is where Stefanie Lenz Kreamer ’04, M.D., spends her days serving the community as a family medicine physician. There, her patients invite her to the local Friday night football games to cheer on their sons and bring in copies of their children’s report cards. And when they can’t cover appointments with cash or insurance, she accepts citrus as currency. “It’s very typical Florida,” she laughs. “Patients bring you their extras from their farms and orchards: ‘Here’s one hundred oranges for my annual checkup.’”
Lenz Kreamer moved to Tallahassee, Florida, with her husband, Jonathan, and her toddler son, Theo (short for Theophilus, meaning “Friend of God”). Jonathan’s tenure-track job teaching economics at Florida State University prompted the family’s move from the nation’s capital to Florida’s capital.
Putting Service First As a 30-year-old doctor who has focused her career in underserved communities, Lenz Kreamer is already making a big impact on the world. But this isn’t the path she would have necessarily pictured for herself. She thought she might go into teaching but couldn’t envision focusing on teaching one subject her whole life.

Reading Mountains Beyond Mountains: The Quest of Dr. Paul Farmer, a Man Who Would Cure the World her senior year ignited her interest in public health. Lenz Kreamer also credits mentorship from LJCDS’ former Community Service Director Susie Nordenger (now assistant head of school for development) and participation in the Girl Scouts as inspiration to serve the public.

“I've always felt uncomfortable with the idea that serving the community or donating is something we do with our extra time or money, or is the last thing you add on to an already busy schedule… Not to discount the good work that happens with one-time donations of time or money, but I wanted to make service a priority to be the first and main thing I’ll do, and we’ll see what follows.”
After LJCDS, Lenz Kreamer attended the University of Pennsylvania to study chemistry and English. “I figured I’d have my East Coast experience and then return to California!” But life had other plans for her. Lenz Kreamer fell in love with Philadelphia’s city vibe and met Jonathan, a fellow UPenn student, on the subway and fell in love with him, too.
She went on to attend medical school at Howard University, a historically black college, in part to experience what it feels like to be a minority. “In my medical school class of 120, two of us were white, and I think I can count on one hand the number of white patients I saw in D.C. during my seven years there. Howard Hospital was the first to care for newly freed slaves, and is still the only hospital that won’t turn anyone away; it can be a financial and business challenge for them to uphold that mission,” she says.
In 2013, Lenz Kreamer began her medical residency at Georgetown’s Providence Hospital, an urban community hospital similar to Howard, with a large Spanish-speaking population. In her third year, Lenz Kreamer served as chief resident. “It was fun because I got to focus on the bigger, messier picture—the deeper cause of healthcare problems,” she says. It was then that she became dedicated to the idea of practicing evidence-based medicine that focuses on prevention as a means to save lives and dollars. 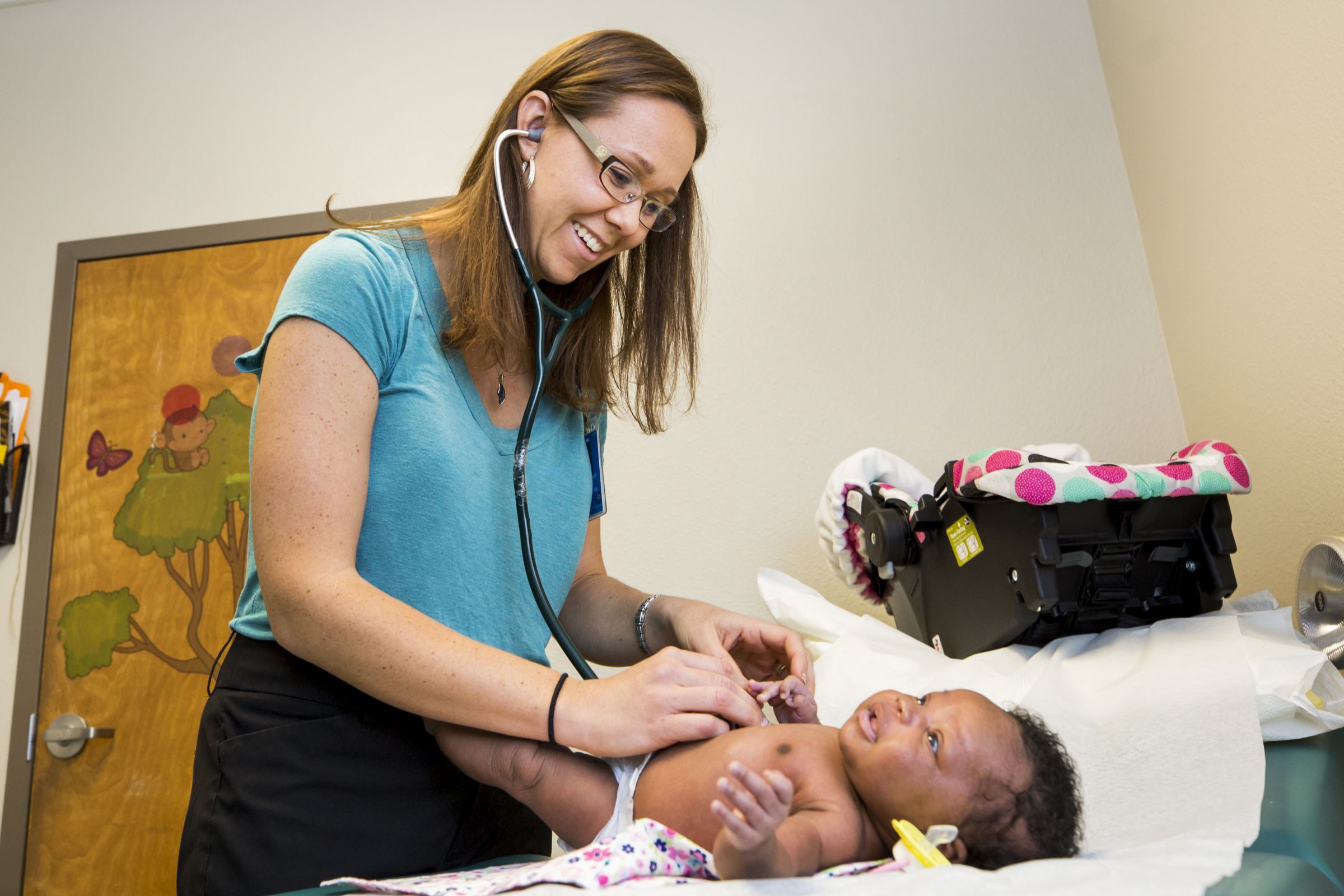 Patients as People
Today, Lenz Kreamer’s days are as varied as they are packed with back-to-back appointments—and she wouldn’t have it any other way. She explains that with family medicine, you’re basically trained to be the “town doctor.”

From the moment she enters the clinic at 8 a.m. to the time she heads out around 5 p.m., she sees everyone from two-day-old newborns to patients in their 90s. The whole family ends up becoming her patients; it starts with one family member and grows from there. She has one family, where she sees all 12 members.

Lenz Kreamer is trained in OB and prenatal care and can perform small office procedures, which helps ease the burden of sending patients to Tallahassee for specialist care.
One such case involves unraveling a medical mystery. Lenz Kreamer’s patient, a 9-year-old girl who speaks English well, recently stopped talking altogether. Her Spanish-speaking parents didn’t bring her in immediately because they didn’t think the problem was medical in nature. Teachers suggested the girl was anxious. Lenz Kreamer has seen her now multiple times, but she says, “It’s tough to tease out details of what happened from the family; the details are important. I’ve had a little success drawing with the girl in an effort to communicate. She appears to be fully aware and even responds with small smiles to my jokes.”

Lenz Kreamer has talked to teachers, set up an appointment with a psychiatrist in Tallahassee, and also arranged for a county translator to accompany the family. A lot of these phone calls may happen outside of regular business hours. “Family medicine can be boundaryless!” she says.
When she’s not puzzling out patient cases at the clinic, Lenz Kreamer enjoys being active and outdoors with her family. She’s especially excited about her new garden. “If I could have one superpower it would be to have a green thumb and grow a garden without weeds.” Her backyard garden makes her think of Dr. Victoria Sweet, who talks about the body not as a machine to be fixed, but as a garden to be tended.

For Lenz Kreamer, encouraging patients to tend to their bodies throughout life means she’s helping create a healthcare system that has room and resources for everyone.
Back