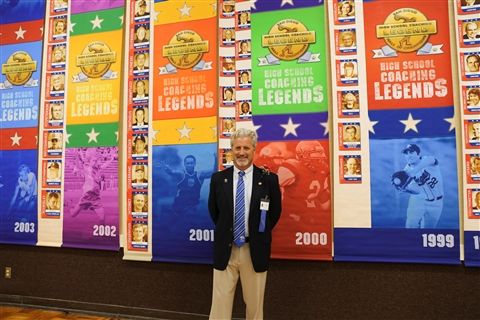 11/14/2017
By Jennifer Fogarty, communications content manager
Director of Athletics Jeff Hutzler was awarded an extraordinary honor as he was inducted into the San Diego Hall of Champions High School Coaching Legends on November 2. Coach Hutzler has been at LJCDS since 2001 and spent 12 years as head football coach. He is the winningest football coach in LJCDS history with a win-loss record of 101–37 from 2002–2013. The teams claimed six league and three CIF Championships under his leadership.

According to Coach Hutzler, “LJCDS athletics fosters personal integrity, work ethic, self-responsibility, responsibility to others, self-sacrifice, delayed gratification, teamwork, overcoming fears, attacking challenges, goal setting, the pursuit of excellence, community and being part of something greater than oneself.”
LJCDS students participate in athletics at a rate that is among California’s highest; 80 percent of Upper School and 98 percent of Middle School students participated on at least one athletic team in 2016–17, with 137 Upper School students playing two sports and 31 earning three-sport recognition. Coach Hutzler was quoted in the San Diego Union-Tribune, “Certainly we want to win games, but our kids are prepared in the classroom and as athletes. We want to turn out good men and women.”
Head of School Gary Krahn, Ph.D., shares his thoughts on Coach Hutzler, “Great coaches are great teachers. Great teachers always give you something to take home to think about besides homework. Jeff is a great coach to all of us at LJCDS. We are fortunate to be on the same team with him.”
Congratulations, Coach Hutzler!
Click here to read an article in the San Diego Union-Tribune about the Coaching Legend award.
Back