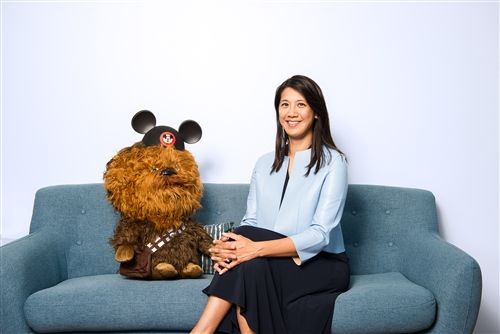 The Magic of Storytelling

12/18/2017
By Tiffany Tran, director of marketing and communications
“I don’t want to go to Disney,” said no child ever. The internet houses millions of videos of parents surprising their children with a trip to Disney. Shrieks of joy erupt as parents reveal, “We’re going to Disney!” And once you enter the parks where dreams come true, you leave your worries behind and experience the magic and wonder of it all.

One of the people responsible for this transcendent experience is Agnes Chu ’98, the story and franchise development executive at Walt Disney Imagineering. The creative division, created by Walt Disney, meticulously orchestrates the Disney experience for the millions of guests visiting its parks and resorts worldwide, and it has contributed to the Walt Disney Company’s success as one of the most admired and powerful brands in the world.
Visiting a Disney establishment is nothing short of an experience—meticulously engineered by a team at Imagineering. Chu and her team of writers work closely with designers, architects and engineers to develop new attractions, lands and resorts that immerse guests into storytelling worlds. She is also charged with mapping creative opportunities from Disney brands, including Pixar, Marvel and Lucasfilm, into long-term content plans at Disney theme parks, resorts, cruise ships and other entertainment venues.

Immersive, high-quality storytelling is what brings Disney films and movie characters to life at its theme parks and resorts. The stories and experiences that Chu’s team produce are integral to consistent branding throughout the entire company. “We are telling a lot of stories that are based on The Walt Disney Company franchises, such as The Avengers, Spider-Man, Frozen and Mickey Mouse, so the challenge is to integrate those stories into the larger voice, tone and experience that the rest of the company is cultivating. When guests visit our parks, they are not meeting a Disney Park version of Mickey, they are meeting a Walt Disney Company Mickey,” says Chu. 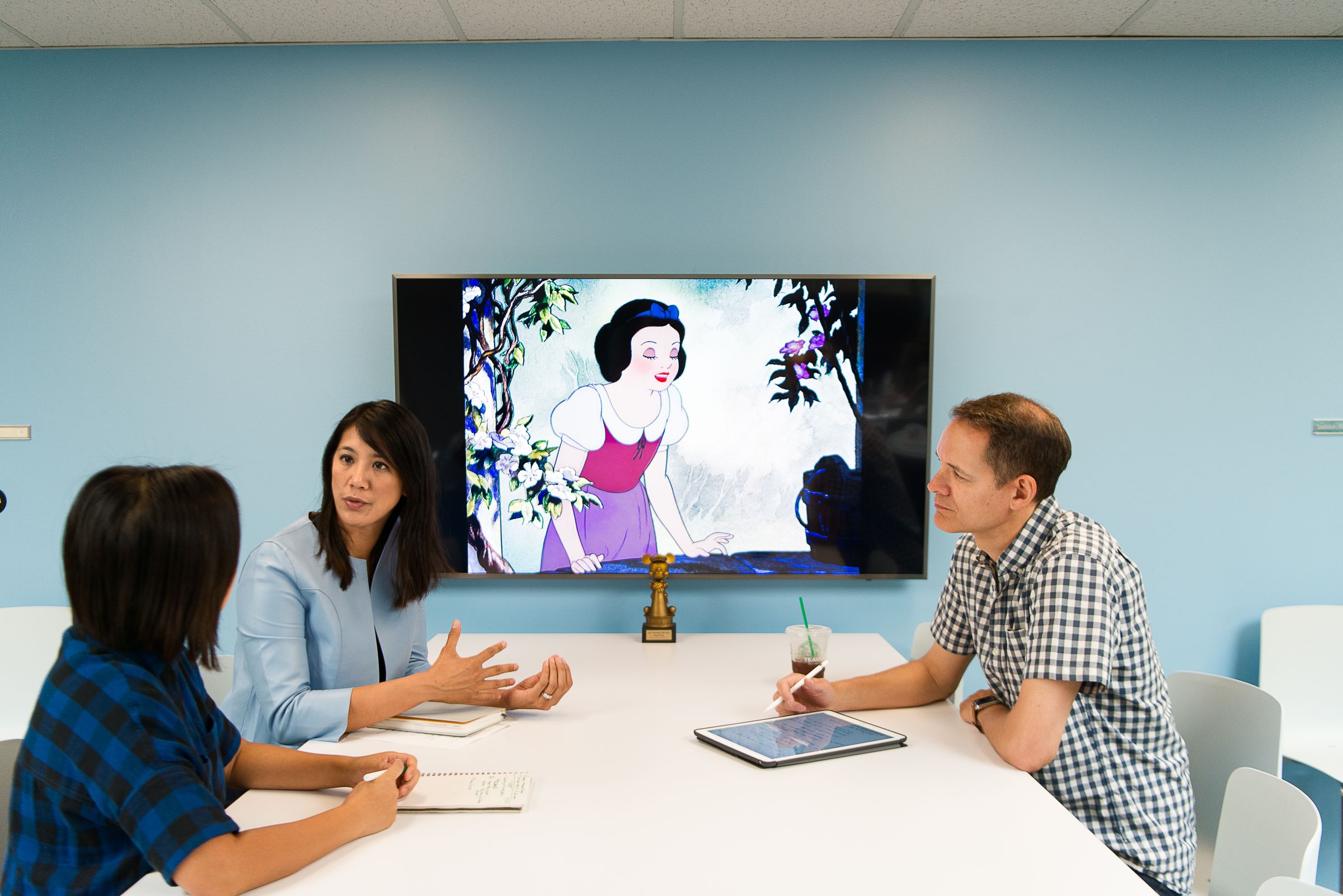 Elevating the Franchises
Top of mind for Chu, her team and Imagineers from more than 100 disciplines are the superheroes that will be landing at Disney theme parks and hotels. Marvel fans will soon see Spider-Man and The Avengers at Disney California Adventure Park in Anaheim, which will join the Guardians of the Galaxy – Mission: BREAKOUT! to create a completely immersive superhero universe at the park. Guardians of the Galaxy-inspired attraction will be added to Epcot, and Disneyland Paris is reimagining Disney’s Hotel New York with a Marvel theme. All narratives will seamlessly connect these physical experiences with the stories and characters fans love.

“After watching a Marvel movie or reading a comic book, people want to see the characters they fell in love with or were intrigued by,” says Chu. “Translating and elevating the brand of Marvel from a 2D proscenium to a 4D space is part of telling a great story.”

Disney is also extending the reach of its successful Star Wars franchise, as Star Wars: The Force Awakens took in more than $2 billion at the global box office. Star Wars fans will witness storytelling brought to life with the newly unveiled Star Wars-inspired lands, Star Wars: Galaxy’s Edge, coming to Disney World and Disneyland in 2019.

These 14-acre lands are expected to be the most immersive a theme park has ever built. Additionally, the new Star Wars-themed hotel will take on new experiential concepts. Guests will participate in an interactive Star Wars story set on a starship complete with character interaction, costumes, secret missions and more. “It offers a chance to not only celebrate the films but live and participate in your own Star Wars adventure,” says Chu.
The Future
The magic doesn’t stop with Marvel and Star Wars. With the company’s constant new developments and continual growth, Chu and her team are juggling several projects, planning nearly a decade out. There are many projects in the pipeline that Chu cannot share; however, Disney recently announced some new developments to the public, including Pandora: The World of Avatar, a new Toy Story land, an Epcot makeover, new Disney Cruise Line ships, a Disney Riviera Resort at Disney World and more.

Disney’s strength is its ability to elicit nostalgia in children and adults alike. For Chu, the challenge is finding a balance in preserving the company’s history and original vision while staying innovative and relevant. With every new decision and project comes various shades and layers of conversation. “The original park of Disneyland is Walt’s vision,” says Chu. “He crafted a very clear promise when you walk through the gates: ‘Here you leave today and enter the world of yesterday, tomorrow and fantasy.’

For Imagineers in 2017, that means shepherding and protecting the original brand vision, but also keeping it relevant for today’s audience. We won’t ever lose sight of what is special about the park, and like Walt also said, we never want to rest on our laurels and assume what made it great then is going to make it great forever.”
Storybook Path
Being on the Disney team is a dream come true for Chu. “I’ve been a fan of Disneyland all my life,” she says. “I grew up going every year with my family, but not in my wildest dreams did I ever think I would get the opportunity to do this.” 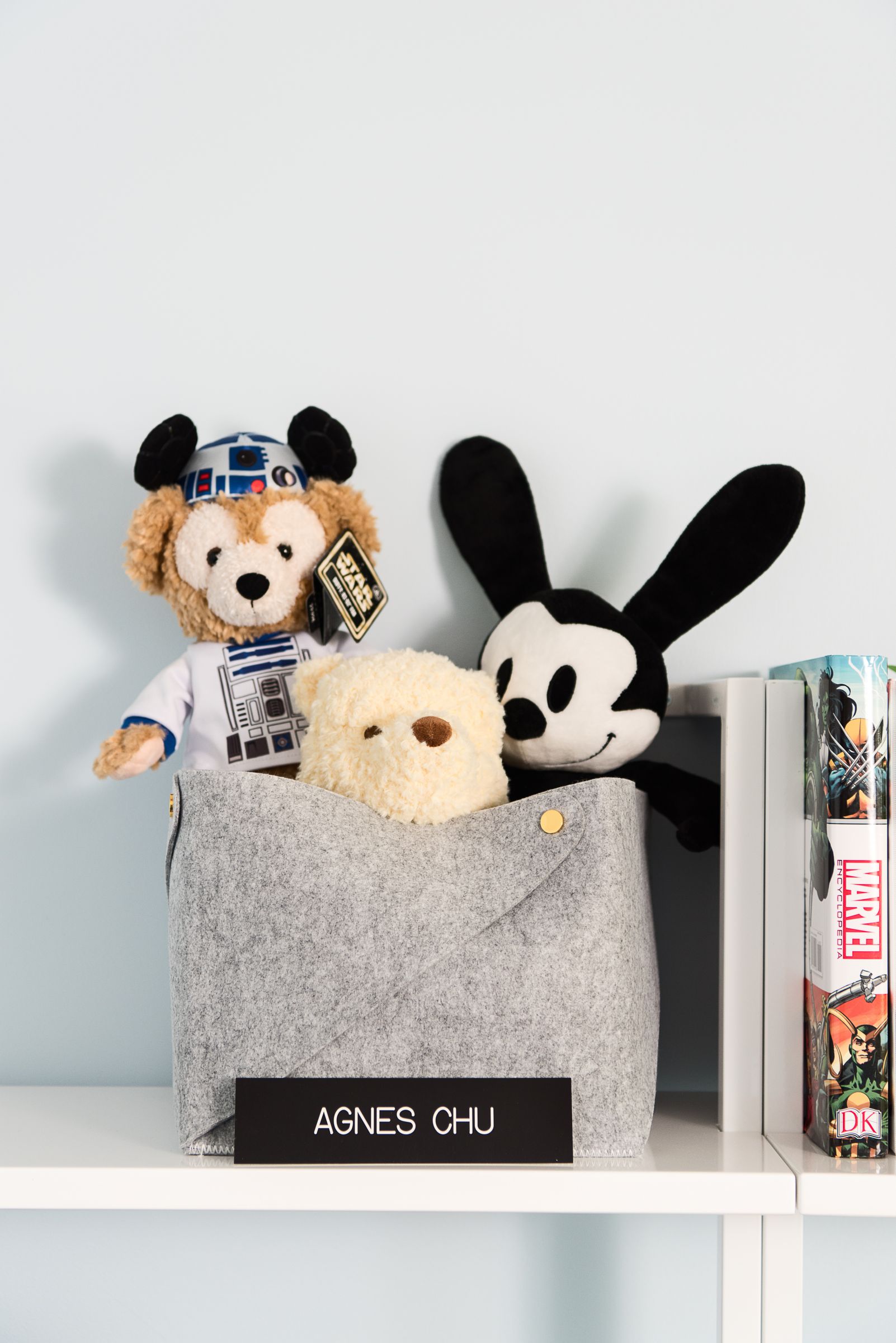 Before joining Disney Imagineering, Chu was the vice president to the office of the Chairman and CEO of The Walt Disney Company, Bob Iger. During her tenure as Iger’s deputy, Shanghai Disney Resort—the first Disney park resort in mainland China—opened in June 2016.

“Getting to contribute to Shanghai Disney Resort was really special and meaningful to me,” says Chu. “Being part of how we worked with the Chinese government, how we presented the park to the world, and how we welcomed guests from all over China was a major milestone in my life.”

Storytelling has been a foundation of Chu’s career. Early on, she served as the producer and director of documentary films at Jigsaw Productions, as well as at her film company, Anagogy Films, both in New York City.

She returned to the West Coast after accepting a position with Disney ABC Television Group in 2008, where she managed the development and production of online video content for abc.com, abcfamily.com, oscar.com and SOAPnet.com. The Web series LOST: Mysteries of the Universe, which she co-produced, garnered a 2010 Emmy nomination. Shortly after, Chu oversaw the Emmy Award-winning soap opera General Hospital and primetime comedies, Malibu Country and Don’t Trust the B---- in Apartment 23, as the director of daytime and current programming.

“I believe that everyone has to work hard to get lucky,” she says. “I worked really hard to prove myself as someone who adds value, who relentlessly pursues excellence. But every opportunity has been something more than I had originally planned. I’m incredibly grateful and proud to be part of this company.”
Setting the Stage
The arts weaved into Chu’s life at eight years old, when she became involved with the San Diego Junior Theatre at Balboa Park, eventually directing her own shows. One summer, she rented the theater from La Jolla Country Day School to put on two productions: Into the Woods, by James Lapine and Stephen Sondheim, and Rumors, by Neil Simon.

The LJCDS chapter in Chu’s storybook is filled with vivid memories of growing up in the Torrey community as a lifer, beginning in kindergarten. She remembers music teacher Keith Heldman’s influence as early as age five when she sang at the Grandparents Day show. Later she joined the chorus in the Upper School and enrolled in his AP Music course. “Mr. Heldman had an enormous impact on my understanding of music and love for music,” she says. “He instilled an early interest in the performing arts.”

“I think all the teachers at Country Day were incredibly supportive,” she says. “People genuinely wanted to see me succeed and do good work. It was an enriching experience in terms of building my confidence, building my understanding of who I was and how I worked with other people, and the importance of community. I think the school does everything it can to bring out the best in people. Country Day continues to be a guidepost to me today as a leader, and I try to instill that same feeling and bring out the best in others.”
Finding Inspiration
With an incredibly busy role that requires extensive hours and business travel, Chu makes it a priority to stay creative by finding inspiration in all forms of entertainment. When not working she is visiting museums in foreign countries, exploring immersive theater and escape rooms, and binge-watching content. “There are so many ways to experience entertainment,” she says. “It’s important to be curious about what other people are doing, not just competitors but rather artists and other makers. Time is the greatest luxury, but I believe the only way to stay relevant is to actually have my two feet walk the pulse of a brave new world.”
Back