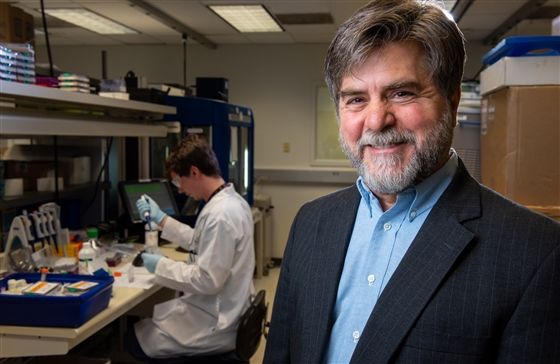 Going Behind the Genes

6/19/2020
By Michelle Choate
Seth Crosby ’78, M.D., has dedicated his career to examining cells, genes and DNA to help understand humanity’s biggest health challenges.
Seth Crosby ’78, M.D., missed his LJCDS graduation because he was in a lab at Scripps Clinic conducting research on pernicious anemia. The research required him to take blood samples from South African fruit bats at specific times, and had Crosby attended the commencement ceremony, he would have risked compromising the test results. He’d started at the lab when he was 14, working his way up from cleaning rat cages, and he took the experiment very seriously.

In the ensuing four decades, Crosby has never found himself far from a lab because he believes deeply in what happens there: It’s science at its unbiased, factual best, dedicated to making life healthier and longer.

In their work, MGI uses their instrumentation, computer software and expertise to analyze huge quantities of data that doctors and drug companies cannot—due to cost and time. “Obviously you can’t sit there and look at 3 billion bits of information with your eyes. The data is very complex and difficult to analyze. It requires teams of people and is very involved,” explains Crosby. “Our people use computer programs to separate significant versus insignificant correlations.” In fact, MGI has hundreds of different statistical programs that are used to look at genetic data in order to make the kinds of observations that doctors, pharmaceutical companies, universities— humanity—need.
Though a great deal of their work is focused on cancer, MGI is involved in a large array of diseases, projects and studies. Much of the lab’s newest research has involved the human microbiome, which is all the bacteria, viruses and fungi that live on and in human beings. Feces alone contains hundreds of species of bacteria, which can be quickly identified by analyzing the feces’ DNA. Says Crosby, “We are rapidly learning that bacteria has a big impact on many aspects of human health.” MGI recently worked with Jeff Gordon, a world-renowned microbiome researcher, to determine why a group of Bangladeshi children were not growing despite receiving adequate nutrition. It turned out that the children’s microbiome was the problem. “They were missing the ‘right’ kind of bacteria in their intestines and so could not properly use their food,” says Crosby. “In addition, the group determined that food can be tailored to the individual microbiome—an unusual example of personalized medicine.”
A Way to Wrap Up
As he enters his 60s, Crosby has begun to think about the next phase of his life. “There’s a part of me that misses patient care,” he shares. In part, Crosby has been influenced by observing his wife’s career as one of St. Louis’s top hospice nurses, which he sees as “a beautiful, meaningful life.” As a result, he’s thinking about someday becoming a patient advocate. “I want to help patients find their way through this incredibly dense forest of modern clinical medicine. These days, the healthcare system doesn’t give doctors much time to talk to patients. As an advocate, I could sit with them for a while and help them understand the issues and what their choices are. I think that would be a great way to wrap up my career.”
Back