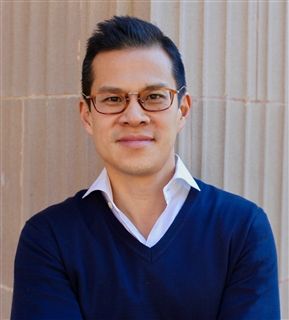 Alumnus to Perform in the Mainly Mozart Drive-in Festival

1/25/2021
By George Varga
David Chan '91 will take part in the Mainly Mozart drive-in Festival as concertmaster, conductor and featured soloist.
Below is an excerpt from the feature in the Encinitas Advocate.
A graduate of La Jolla Country Day School, Harvard and Julliard, he gave up playing soccer here as a teen in order to focus on his music. Now the Del Mar-bred violinist/conductor returns for Mainly Mozart’s ambitious Festival of Orchestras.

For many of the nationally prominent classical musicians who traveled to San Diego last October for the Mainly Mozart Festival Orchestra drive-in concert series, it was a welcome if surreal experience to perform in the main parking lot of the Del Mar Fairgrounds as cars zipped by on the adjacent Interstate 5.
For David Chan, it was also a homecoming.

“I grew up in Del Mar, and my parents live there to this day,” said the violin virtuoso, who is the concertmaster for New York’s famed Metropolitan Opera Orchestra.

“It was amazing to play at the fairgrounds, a place I grew up going to in the summers for the rides, the cotton candy and the funnel cake! It brought back a lot of memories, and it was very meaningful, since San Diego is my hometown.”

Now 47, Chan is a graduate of La Jolla Country Day School, Harvard and The Juilliard School, where he earned his master’s in music in 1997 and currently teaches. He’ll wear several hats when he returns to San Diego in early February and April for the first two segments of Mainly Mozart’s three-part Festival of Orchestras, which will be held in a drive-in concert format at the Del Mar Fairgrounds.

The 2021 festival will conclude with concerts here between June 10 and 26, for which exact dates and outdoor venues are still being confirmed. Initial plans called for the February, April and June Festival of Orchestras performances to also be held as drive-in events in Orange County, but the coronavirus pandemic led to the shelving of those dates. Mainly Mozart CEO Nancy Laturno hopes to put at least some of them back on track, if the pandemic in Orange County subsides enough in the coming months.

“You can see the heroic effort it takes to pull something like Festival of Orchestras off in these times,” Chan said, speaking from his home in Bergen, N.J. He lives there with his wife, fellow Met Orchestra violinist Catherine Ro, and their three children.

“The conditions in Orange County are extremely serious, and there is no county approval for doing a drive-in concert festival there, so that is not happening,” Chan continued. “And (actor) Malcolm McDowell, who was going to narrate one of our concerts, had to cancel. All these issues are very real and important. Public health is our No. 1 priority.

“But keeping culture alive, wherever and however possible, is so important. The collective effort to make all this happen is something I am proud to be a part of with the Festival of Orchestras.”

Click here to read the full story on the Encinitas Advocate.