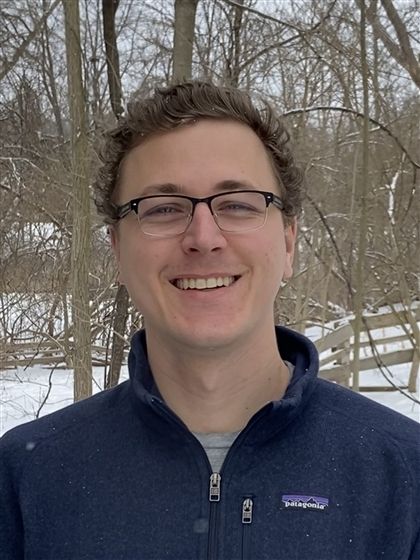 2/17/2021
By Katie Sigeti, philanthropy manager, alumni programs
Alumnus helps develop tests for diseases, including the novel coronavirus.
LJCDS alumni of all ages, backgrounds and life paths continue to embody the LJCDS promise of inspiring greatness for a better world. Whether they graduated several decades ago or just a few years ago, our alumni work in many capacities to solve the myriad of issues our global society faces. The COVID-19 pandemic has brought forth many such problems, and our alumni have risen to meet and defeat the challenges.

Drew Narwold ’10 lives out the LJCDS mission every day as a scientist. He earned his bachelor’s degree in biochemistry from the University of Southern California before moving back home to San Diego to work in research and development for Hologic, a medical technology company. After a year and a half, he entered graduate school at the University of Michigan, earning a Master of Science in cellular and molecular biology in 2018.

Drew shares that his experiences at LJCDS strengthened his love for science. After joining LJCDS as a sophomore, he found joy in his chemistry and Science and Society classes with Tom Perrotti, physics with Bill Doerge and AP biology with Susan Domanico, Ph.D. “From the standpoint of sheer interest in the sciences, I have no doubt that Country Day and those classes definitely cemented my decision to pursue it,” he shares.

As an integration scientist at NeuMoDx, a biotech company based in Ann Arbor, Michigan, Drew works on developing tests for a variety of diseases, straddling the whole spectrum of test development from the engineering side to the bench science side of the project. “It’s been a fun role because it encompasses everything from bench to final result,” he says.

In 2020, Drew found himself in a critical role in the battle against a new disease, as he and his company raced to develop tests for the novel coronavirus. “2020 was a whirlwind of exponential growth for the company,” he shares. Having just come off the formal approval of their HIV assay at the beginning of March 2020, they began to hear rumblings about a new virus emerging in China. Drew and an assay development scientist began work on preliminary COVID-19 test formulations, dedicating some time to the project during the first two weeks of March. Priorities quickly changed, however.

“We went from that project being kind of a back burner project to the number one priority across the entire company,” Drew explains. “We were building systems to run the tests, we were going to start manufacturing loads of the tests, we were going to develop it and submit it to the FDA and the European regulatory bodies and that literally seemed to happen overnight.”

“The busiest time of my 2020 was the time when everyone else was being told to stay home,” he shares. Pulling 16- to 18-hour days, they got the job done. “It was an incredibly wild time to be a part of such a quick, rapid response,” says Drew. “It was a crazy time, but in hindsight, well worth all the effort that we were able to put into it.”

Drew recently began a new role as a scientist at Zomedica, a veterinary diagnostic and pharmaceutical company based in Ann Arbor, Michigan.
Back