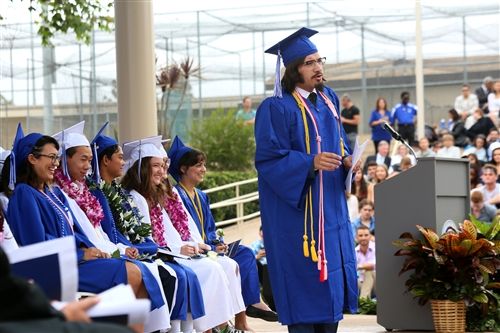 5/26/2016
By Aidan Turek '16
Well here we are. When I was in kindergarten I made a time capsule to be opened once I graduated from high school. I remember thinking to myself how vastly distant that moment was. I just couldn’t believe that could ever happen. The funny thing is, I still can’t believe it. I have been living in increments, one day after another, so that when I finally realized I was graduating, I barely knew what I had been doing. I had to ask myself who am I, what have I done, where have I gone, and where am I going?
To understand the entirety of my experience I made a little list. I’ve been going to Country Day for ten years. I’ve know some of you for just as long as I’ve known my little brother. It’s been close to two hours of transit every day for about a hundred days of school each year for ten years—or about eighty days of nonstop driving. I’ve had nine years of math and twelve years of history, which includes two Jonathan Shulman blocks, which is for some more than enough for a lifetime.

I’ve got plenty of numbers; SAT scores, days absent, tests, essays, grade point average, and hours of practicing tuba, tennis, water polo, frisbee. I have three waistcoats and five neckties. I have been called ‘Colonel Sanders’ about a hundred times, and been confused for a teacher at least the same amount. By countless metrics like these I can put into some sort of context my time at Country Day, what amounts to over half my life. After all, when colleges ask what you’ve been doing for four years, “things” is not a sufficient answer. But this mental list, this account of accruement, of character, will always be faulty, faulty in two directions; first, that as long as this list of mine is, it will never be as long as the lists of others. As happy as I am about some, if not most of what I’ve done, it is always in the context of others who have invariably done better.

I have learned an immense amount from AP Literature, thoroughly enjoyed the class, but if I pride myself for the hard-earned eleven out of twelve, I am forced to realize the perfect scores going to others. And how discomforting is it for us to think of some happier other, whose future seems all the more perfect, all the more studded with success and sincerity, than our own in this time of hope and futurity. I end up with the feeling that my list is lacking; I have never been a madrigal, never served on the ethics council, never had straight A’s, never, never, never. The second biggest problem is that our lists will never truly represent who we are, not now, and not in the future. I can’t fit on my list my love of Dostoyevsky, or time singing in the car with my brother, or my experience acting in and writing for student plays. This list of mine doesn’t paint the full picture of who I am now, but merely stencils in some rough outlines: the grades, a few extracurriculars, a collection of dots meant to represent the whole. Additionally, and perhaps more damningly, this list doesn’t even begin to grasp the person I will be, even though the list is all I have to go on.

Our experiences, good and bad, are the beginning of a life. We have ended this era just to begin a fuller and more shaping time. It is as if we finished the first leg of an expedition to the top of a mountain; we begin with nothing and start climbing, work hard in school, climb, do well in college, climb, get a good job, climb, and finally reach the summit, the ultimate goal and final motivation for our actions, the answer to questions like “why do I need to read this last chapter of Huckleberry Finn,” or “why do I really need to graduate.” But where is our summit? I use this list of what I am now, faulty as it is, to look at my future, at my summit, because what better predictor of future success is there than current success? I start on a line of false thinking. Right now I have done what I have done and that’s it. I won’t ever be better, won’t ever do better, and won’t ever live better.

I am an acceptable chemist and a challenged math student, so that rules out a career in applied sciences and arithmetic. As much as I love history, a year of Shulman World History has shaken my self-confidence, so I probably won’t be a great history teacher. I am far from mastering writing (as two years of Rappaport would prove to most anyone) so no career in journalism, or politics, or acting. In trying to find my summit, trying to derive just who I am and how good I am, I limit myself. Here I am, ready to begin a steeper incline, and I’ve tied my legs together. I say to myself ‘get the diploma, go to the college that accepted me, and get the job that such an education provides, live the life that was prescribed from what I have done as of this very moment.’ This is the greatest fallacy I have fallen into; I let myself believe that it was success in high school and college that made me great. This is utterly false.
No college can make us great. No one, however privileged, can rest on their laurels for the next four or eight years and expect be anything more than they are now, because we aren’t as good as we could be now. We are lacking, but not permanently. It falls to us to improve ourselves, to make the brave endeavor, to think of our own lists as nothing but paper, because the strongest barriers of our own fulfillment are those erected by us. I tell myself that I am not a physicist, not a chemist, not a writer, not a politician, not an actor. I imagine a summit because comfort of not attempting to be better is appealing. I can stop caring about my Mandarin grade because I think I’m as good as I’ll ever be. My summit is not that high, so why try?

The failure of never having tried will always be worse than to have tried and failed. I’m not the strongest chemist, but the only day that I stop improving my skill at chemistry is the day when I stop trying. But I won’t stop, and that means, though the climb will steep and rocky and slow, I have limitless potential. It is true that for some, who’ve got their own cars and SAT tutors and high-class connections and every other conceivable advantage, for some to just float from base to mountaintop, in high school, in college, in life, as if preordained. Their summit is always accessible by stairs, while others scramble up sheer, cutting stone. But even if their ascent is different from ours, the summit is the same for everyone. For me and you with our limitations and our lists, we must realize that the horizons, the summits in our lives should always be extending, that we shouldn’t ever be as good as we can be.

Graduation, this moment, is indeed the end of an era. But it is the beginning of our ascent, the end only of this leg of the journey. I can crumple up that list and throw it away because I know tomorrow is another day, that the night of today is the dawn of a more brilliant tomorrow. I have done nothing in my life, and I believe that to be a most liberating thought. I have barely begun climbing.

The list which I made, the ‘me’ which I created, will always be the me of yesterday, ever bound by toxic context of how well everyone else was doing. How can I say who I am or what I will do when so many new experiences lie before me? My list of never becomes the list of someday soon and I can sleep easy tonight knowing that I can make myself better tomorrow than I am today. That list of mine is nothing compared to what I will be tomorrow, or in four years, or in twenty. If in twenty years I have climbed to write for the New York Times, if in forty years I have climbed to be the ambassador to Austria, if in fifty years I have climbed to hold the executive office of the United States, I know that at each new summit the view will be more spectacular, the effort expended to reach that height more satisfying.

The most damning thing we can do to ourselves is to take the list for fact, to believe our epitaphs already engraved, to think, even for a moment, that how far we’ve climbed up our mountain is as far as we will ever go, that a failure today corresponds to a failure tomorrow, if I take my bombing the first Psych test to mean I can’t ever be a psychologist, or my shaky attempts at learning a second language to prevent me from ever trying again. When we assume to know what our summits are, when we stop trying, we lose the people we could be, as hard as it might be to get there. And yes, we will always be climbing our mountains, appending our lists, adding to ourselves, but far from imprisoning us, this sets us free. We will be as great as we aspire to be today. Remember that it is easy to give up time, to lose today because we were sick or tired or had to break from our expeditions upwards. The loss of the half-letter grade in WCCP II, or losing that one football game, or mangling a good choir solo, is negligible in comparison to the boundless future. But it is far more painful, and far more disastrous, to give up a dream, to give up climbing outright.

I do that, and I surrender to the list, surrender to the idea that I can only be as good as I have been. We give up dreaming and we condemn ourselves to the reality of today, and what is today but the half-built paradise of tomorrow! We must stand up and tear to pieces this list of who we are because we will not be defined by what we have done today, but only by what we believe we can accomplish tomorrow. The person you will become, doctor-lawyer-governor-actor, is not another person, simply you, waiting to happen.

Never surrender the dream of self-improvement, never settle on the mountainside, and never subjugate yourself to the list of what you are now, because we can make ourselves and the world better every day, even if the alteration is imperceptible. The truest judge of how far we can climb, how much we can accomplish, is from the view of the summit. The time for observing future fantasies is at an end; let us not dream of what we do, but do what we dream.
Back