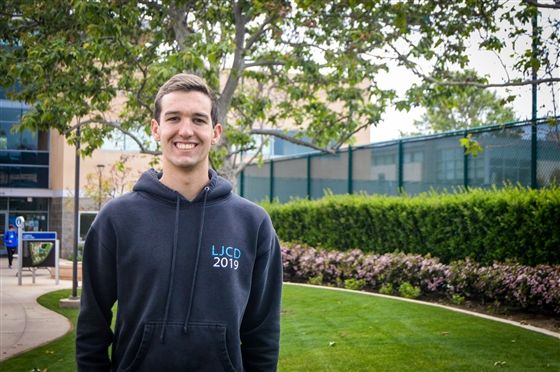 4/25/2019
By Eliza Jason, marketing and communications intern, photo by Amy Cho '21
A graduating senior reflects on the opportunities he’s pursued at LJCDS.
Defining Ryan Lamkin ’19 proves to be a difficult task. You could mention his athletic career, experience in the arts or even his passion for science. While Ryan is a young man of many talents, he is best understood as the combination of all of these diverse interests.
In his 10 years at LJCDS, he’s pursued a little bit of everything and found his true passions. He picked up a clarinet in fifth grade as a class requirement, but he hasn’t put it down since. He’s played in various campus groups like orchestra and jazz band, and he’s even performed by himself a couple of times. “I generally don’t like being in the spotlight,” Ryan shares, but his love for music pushed him in front of a large crowd many times. “I really love playing the pieces we’ve been working on for months and seeing how well they sound.” He plans to seek out opportunities to keep playing music in college.
The University of California, Los Angeles (UCLA)-bound senior also loves spending time in the pool. He has been on the varsity water polo team all four years and was a captain for the last two. “I’m more like a person that leads by example,” Ryan explains. “I’m less vocal than some of the other kids, so I just kind of lead by my work ethic.”
His tenacious work ethic is just as evident in the classroom. Ryan developed his love for chemistry here at LJCDS with Mr. Lineback, Upper School science educator. Chemistry comes easy to Ryan, and he likes the way the subject is organized. He interned over spring break and will spend his summer with Drug Delivery Experts, a local pharmaceutical consulting and development company. “I’m hoping to go into research, so I can impact the world with what I find,” Ryan says. He’s excited to explore the different areas of research as a chemistry major at UCLA in the fall.
When he’s not performing or practicing his clarinet, training in the pool or balancing chemical equations, Ryan loves hanging out with friends, spending time at his church and playing video games. He’s thankful to the LJCDS community for allowing him to pursue athletics, academics, extracurriculars and even his hobbies. He recognizes the ways his teachers supported him and helped him overcome challenges over the years. “Knowing I had so many opportunities here and soon at UCLA to do what I want” makes all the difference, Ryan says.
Back