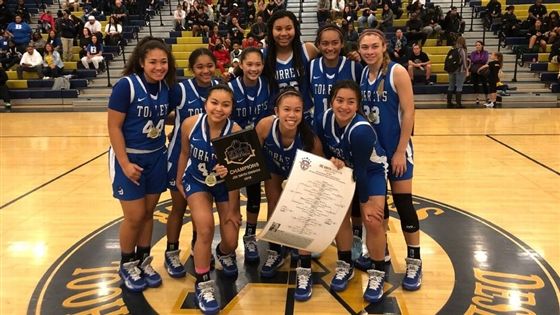 1/16/2020
By Rachel Baxter, digital media and design coordinator
ESPN highlighted the LJCDS women’s basketball team and their focus on mentorship.
Below is an excerpt from the feature on ESPN.com.

La Jolla Country Day School has figured out the recipe to becoming a girls' basketball powerhouse: by becoming a mentor factory.

First it was former LJCD and WNBA star Candice Wiggins mentoring future No. 1 draft pick Kelsey Plum several years after she graduated from the San Diego area high school. Then it was Plum, who now stars for the Las Vegas Aces, mentoring Te-Hina Paopao, the No. 33 prospect in the Class of 2020, who signed with Oregon. And now it's the senior Paopao mentoring freshman Breya Cunningham, LJCD's next star, who already has offers from several Power 5 schools.

Each has passed on lessons learned from their years and experience in the game. Now it's Paopao's turn. And, so far, Paopao and Cunningham have been exactly what each other has needed this season.

In her final high school season before she heads to Eugene, Paopao has a post player in Cunningham who could end up being the difference between a championship and an early exit in the California state playoffs.
And Cunningham, in her first season on varsity, has a teacher, a guide, a cheerleader and a benchmark in Paopao.
"T has been her biggest fan," said coach Terri Bamford, who has been at La Jolla Country Day for 22 years.
Together, they've helped lead La Jolla Country Day to a 17-1 record, a title at the recent Nike Tournament of Champions in Phoenix and the No. 4 ranking in the espnW 25 Power Rankings.
"I think we can be very, very good," Paopao said. "But we just take one game at a time. I mean, you want to win state championships -- you want to win everything -- but I think it all comes down to one game at a time."
Click here to read the entire article.