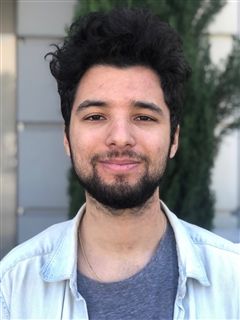 4/16/2021
By Michelle Choate
Alumnus is co-creator of Friends in Need, a collection of poems, stories, articles and art created by artists born between 1981 and 1996.
Miles Sager ’13 has always believed in the power of art  to engage, inform and, potentially, transform. Art, particularly art that conveys a personal experience with current events, provides a window into the creator’s life and soul. This belief led Sager to co-found Friends in Need, a zine by and for millennials that uses artwork to highlight the issues confronting their generation—and the world.

“I think the news is easy to tune out or turn away from; it can background noise,” says Sager. “Art can effect change on people because they see work created by someone who has been impacted by past experiences or recent events. With artwork, you do not just hear the facts; you witness what the artist is thinking and feeling. People connect with that on a deeper level, and it might even change their opinion on  an issue or lead them to action.”

A documentary film producer by trade, Sager co-founded his zine (a self-published, non-commercial printwork that is typically produced in small batches) in early 2020 with his partner, Olivia, when they were both between jobs. The initial intent was not only to find an outlet for their creative energy but also to provide their fellow artist friends with a platform for their work. “For most artists, it is very difficult to get their work seen,” explains Sager. “Someone else has to decide to give you a job or a place to showcase your work. With Friends in Need, our mission is to empower other artists, to find an audience for their work, as well as to speak on the issues they are facing. It’s been great validation for our artists to see their work published.”

Each edition of the zine starts with an open prompt about a theme, such as individuality or romance; Sager’s artist friends provide paintings, photos, writings, etc., representing their thoughts on that theme. As editor-in-chief, Sager curates the submissions and also contributes work of his own.

A particularly personal theme for Sager resulted in a special issue of the zine entitled “Black,” which began as a reﬂection on Sager’s thoughts and experiences as a multiracial (Jewish and Creole) man in America. In addition to powerful visual artwork, the Black issue contains a reﬂection from Sager on a video he saw that spoke volumes to him about the systemic trauma of racism. In the video, a young boy of about 7 years old is innocently shooting baskets by himself until he sees a police car coming down the road, whereupon he runs and hides. “That video really touched home for me because the little boy playing basketball in his driveway is exactly what I would be doing at that age,” says Sager. “That child should have nothing to worry about in that situation; he’s just being himself. But we’ve seen so many cases in the national news where people just being themselves are still being targeted. And this is not just a 2020 issue; it’s been going on for hundreds of years and has become so deeply rooted in the psyche of Black America that a young child is automatically afraid of a police car.”

Friends in Need may be a small platform, but for Sager, his partner and their fellow contributors, it provides a big return. “This is our truth. Putting art out there is as real and raw as you can be. We just want our work to be seen and our voices to be heard.” says Sager. “I think that art and all creative endeavors at this time are really important, especially with social distancing and quarantine. Any medium that allows you to reach out and connect to people in a meaningful way is very gratifying.”

Click here to view the special issue: friendsinneedzine.com/black
Back