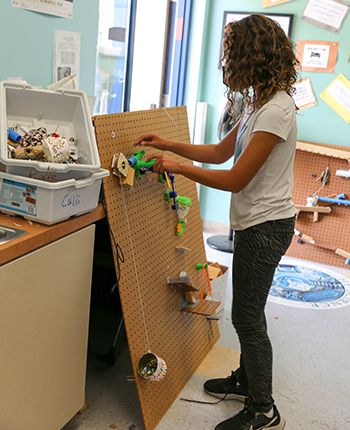 5/24/2022
By Jennifer Fogarty, communications content manager
Students combine physics and engineering design with computer science to ignite their creativity.
If the name Rube Goldberg doesn’t sound familiar, a quick internet search reveals the over-engineered, chain-reaction machines that perform simple tasks which have appeared in cartoons, movies, music videos and more. The sixth-grade physics and engineering design classes are building their versions and collaborating with computer science to connect the machines.
Students are first introduced to the OK Go music video for “This Too Shall Pass,” an elaborate example of a Rube Goldberg machine that syncs perfectly with the song. They learn about Rube Goldberg, a Pulitzer Prize-winning journalist, cartoonist, engineer and inventor who created more than 50,000 drawings and thousands of comic strips. His cartoons were filled with the overly complicated devices that bear his name.
The class studies simple machines and the transfer of energy before they are unleashed in groups of three or four to use their imagination to brainstorm their strategy and design their Rube Goldberg machines.
All projects must meet minimum requirements, including having at least 12 steps and incorporating one lever and one pulley, several inclined planes, and an additional simple machine. Their designs need to have a 360-degree turn plus dropping and moving objects at a certain height and length.
The final design requirement challenges students to code a sensor to trigger the beginning of the next group’s project. “Typically, Rube Goldberg machines are initiated by one touch of something like knocking over a domino or releasing a car, and they perform a simple task at the end,” explains Matt Bessler, Middle School science educator. “In collaborating with computer science, instead of having a task for each machine, there’s going to be one task per class and each project will be connected by an Arduino. They write a program to code the sensor, either a button or a motion sensor that will set off the next machine. It’s connected to either a servo, like a windshield wiper or a deadbolt that will open or close to release something.”
Throughout the year, sixth graders learn different types of coding and the electronics and wiring of basic circuits. “This project allows them to apply the skills they learn and see it in motion,” shares Jeremy Bank, Middle School science and design and innovation educator. “Successfully applying their skills to a project is a very meaningful step in design, engineering and innovation.”
Each class voted on what the simple task will be at the end. One project will order a pizza, another will set off a blast of confetti and two will trigger a pie in Mr. Bessler’s face.
Students apply the concepts they learned on potential and kinetic energy, transferring energy and what affects momentum. “There are a lot of different moving parts,” shares Mr. Bessler. “Whether it’s that critical thinking piece or problem-solving, they really dive into the engineering process and see that it’s not linear. Sometimes you have this great idea, and you figure out it doesn’t work. You have to make changes and start over. It brings out their creativity. And patience. Nothing will test your patience more than working with dominoes.”
Part of the fun of designing and building the machines is finding materials to use. Students can bring in their own items, but Mr. Bessler’s stash of “random stuff” includes old marble track, hot wheels track, scrap wood, Dixie cups, toilet paper and paper towel tubes, potato chip cans and styrofoam. Connection materials can be zip ties, hot glue or duct tape. One group is even using water in their design.
“They’re super engaged,” shares Mr. Bessler. “It’s one of those projects where you introduce it and they just get right to it. They can’t wait to get started, even outside of class. When they get to school in the morning or on breaks, they check on it and start tinkering with it on their own time. They’re so excited, and they can’t wait to get back here to build.”