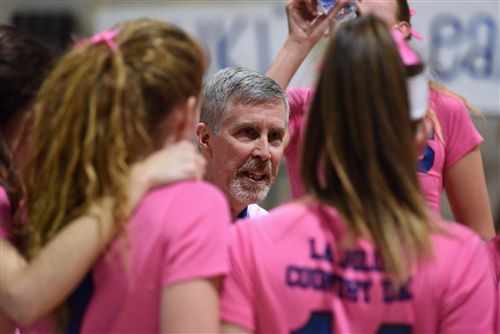 10/25/2018
By Jennifer Fogarty, communications content manager
LJCDS celebrated Coach Peter Ogle’s 41-year career during his last regular season home match.
On October 17, 2018, current students, alumni, faculty, staff and friends joined together to honor coach Peter Ogle before he steps down as head volleyball coach and retires at the end of the school year.
For 41 years, coach Ogle has been committed to inspiring greatness in his student-athletes by encouraging them to create their own personal curiosity of excellence. The team’s motto is “Get better each day.” Coach Ogle’s philosophy is never about winning but rather about playing well and not being afraid to fail.
Under his leadership, the team has amassed a 740–385 win-loss record (18-9 x 41 years) earning three Coastal League, seven CIF, four Southern California regional and three state championships.
Coach Ogle also served as the coach of a variety of Middle School teams and teaches Lower and Middle School physical education classes.
Coach Ogle is also a proud LJCDS alumnus as a member of the class of 1971. He played baseball and volleyball in college and graduated from San Diego State University with a degree in physical education, knowing early on that he wanted to be a coach.
“Whether he’s teaching a second-grade PE class or a varsity volleyball team in a state final,” shares Athletic Director Jeff Hutzler, “Peter is a consummate professional at what he does. He puts his body, mind and soul into what he does.”
The game on October 17 also served as a fundraiser for breast cancer research. Dig for the Cure and other events during the month raised nearly $2,900 with donations going to Susan G. Komen San Diego.
To read more, visit KUSI, The San Diego Union-Tribune and the La Jolla Village News to view their special features on Coach Ogle.