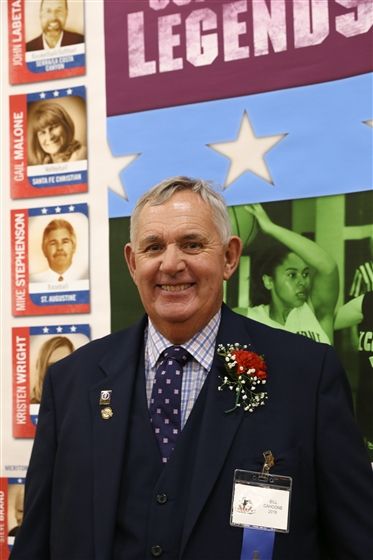 11/12/2018
By Tiffany Tran, director of Marketing and Communications
Former LJCDS coach of 39 years was honored at the San Diego High School Coaching Legend 20th annual induction dinner.
Congratulations to former La Jolla Country Day School coach Bill Cahoone who has been named a San Diego High School Coaching Legend, presented by the San Diego Hall of Champions.
On November 8, 2018, coach Cahoone was one of eight recipients honored in this year’s ceremony. Since 1999, the San Diego Hall of Champions has honored retired high school coaches of the San Diego California Interscholastic Federation (CIF). Candidates for the Coaching Legends must serve a minimum of 10 years as a varsity head coach and offer a significant contribution to the game and the coaching community.
Coach Cahoone retired from LJCDS in spring 2015. During his 39-year-career at LJCDS, he led 70 seasons of a varsity sport, serving as the head coach of men’s and women’s basketball, men’s and women’s golf, and softball. He was also the assistant varsity coach and junior varsity coach for the eight-man and 11-man football teams for 16 seasons. When not coaching Upper School students, he helped develop the physical education curriculum and taught PE to Lower and Middle School students.
“He was like a big brother to me and a great mentor,” shares coach Kevin Reaume. “And the kids knew they could count on him. He was always there for them. They always knew they had somebody they can count on every day they went to practice.”
Coach Cahoone was recognized by the selection committee for the full body of his work as a multi-sport coach and his impact on students over 44 total years working in independent schools. In 2016, coach Cahoone received the Head Coaches Award sponsored by the High School Sports Association of San Diego.
“Coach Cahoone is the very definition of a legendary coach and physical education teacher,” shared Director of Athletics Jeff Hutzler. “His knowledge of various sports and his ability to connect with young people is extraordinary. But more importantly, Coach is one of the most helpful and genuine people I have known in my 35 years of coaching. He was always eager to help his colleagues in any way he could, and he always did what was best for his students and athletes. The Torrey Athletic Department misses Coach Cahoone!”
Coach Cahoone is the third LJCDS inductee in the San Diego High School Coaching Legend, joining Athletic Director Jeff Hutzler (2017 inductee) and the late coach Jack Wigley (2002 inductee).
Read more about the induction ceremony in The San Diego Union-Tribune.
Back