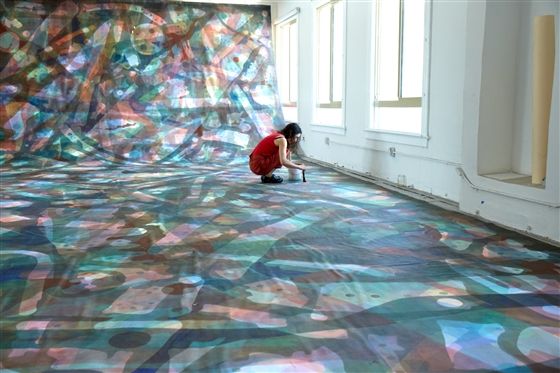 2/7/2020
By Tiffany Truong, director of marketing and communications
Ali Silverstein '98 discusses her artistic process and inspirations.
Look back at your childhood. Can you name experiences that were influential to your life as an adult? Oftentimes, the moments that resonate—that have had a lasting impact—are the ones you never thought twice about at the time.

Ali Silverstein ’98 fondly remembers visiting the Pacific Design Center in West Hollywood (also called the Blue Whale) with her grandma, Gert, an interior designer. She recalls sitting on the floors of the showrooms, playing with textiles and fabric swatches.
Never could she have predicted that the hours spent exploring and arranging fabric swatches at age 4 would influence her creative process as an artist today. “That is exactly what I do here,” Silverstein shares. “I essentially make my own textiles and then cut them up and move them around.”
In her studio in Los Angeles, vibrant large- scale canvases fill the spaces of her white walls, and massive colorful sheets and cutouts of previously painted canvas pile on the floor and on racks. Silverstein uses paint as a medium but doesn’t consider herself a traditional painter. Her works are designed with layers of overlapping canvas that are painted, stained, stenciled or cut into shapes. Her practice is physical in nature. A painting may begin at hand- scale but can evolve into a sculptural construction at body-scale.
“Often it feels more like dancing than anything else,” she shares. “I’m always dragging these huge piles of canvas across the floor and putting them on top of other things. Then dragging something, putting it up on the wall, pulling it back down again, and then sweeping it with paint.”
Silverstein’s work has been featured in multiple solo exhibitions around the world, including in London, Tel Aviv, Mexico City, New York City and Santa Fe. Additionally, she has been an artist-in- residence at the Bialik space in Tel Aviv and at the Esalen Institute in Big Sur.
Much of Silverstein’s practice is improvisational and unpremeditated. Her final product is a surprise. Its philosophical spirit is best described as abstract expressionism and action painting. “The marks that I make and the actions that I take are extensions of my body,” she shares. “I work very spontaneously when I am painting. It’s very gestural.”
For a perfectionist, trusting her instincts in her creative process takes ongoing practice and discipline. In the earlier years of her practice, Silverstein mainly painted preconceived images, such as a bowl, a landscape or the front page of The New York Times. In 2013, her philosophical approach to painting evolved. Silverstein began teaching herself to incorporate the creative moments during her painting process by allowing her instincts to guide her brush or next move. “For some people, it wouldn’t be so difficult,” she says. “For me, it was very difficult because I would feel how my mind interfered with my impulses constantly. Having to learn how to override my mind took a lot of work. I learned how to deal with resistance and with being afraid to ruin a painting, and I learned how to follow my instincts. Perfectionism is something I try to fight against in art-making.”
Silverstein’s process is spontaneous, but not everything is unplanned. The ideas often begin with a question or a deep curiosity. “It can be anything. For example, I might decide I want to paint bowls of fruit, and I will delve into the exploration of bowls of fruit almost in a scientific way,” she says. “I want to really investigate the idea: What can I do with it? How can I pull it apart and put it back together?” Silverstein’s process of constantly questioning “What happens if…” and her ability to place a unique lens on an idea result in work that upends the status quo. “Anything you can imagine ahead of time and feel comfortable with means that it’s been pre-approved somehow,” she shares. “And that’s not very interesting.”
She remembers another childhood experience that proved influential to her art-making process today. Silverstein used to spend hours walking on the sand, collecting shells with her dad while on vacation in Hawaii. “I would pick up those shells and then look for somewhere else to put them,” she recalls. “I was interested in picking up the shell, appreciating its shape and color, and then giving it a new place to be, which is what I am doing in the studio all the time.”
Taking risks and pushing boundaries are part of  the process, although fear may sometimes get in the way. “There isn’t such a thing as [going] ‘too far,’” she explains. “The danger is much greater on the ‘not going far enough’ side. There are more times that I feel like I haven’t gone far enough. The worst thing that can happen when you’re painting in this way is when you make something you like and then you have this impulse to paint like a big blue triangle, and you don’t allow yourself because you might ruin this pretty thing you did, and then nothing interesting ever happens.”

Silverstein’s body of work isn’t all improvisation, however. Figurative painting, specifically portraiture, is where her practice began. Today, portrait commis- sions continue to be a beloved part of her craft. “It’s an amazing thing to enter people’s homes and lives to have this brief but intimate time with them,” she shares. “I feel very present, very connected. We have a photo session in the person’s home, which can take up to four hours. I take hundreds, even thousands of photos, and then spend hours going through them again and again before I begin to paint. I really love doing something so slow and old-fashioned in a fast-paced world of digital image overload. These are physical. They are heirlooms.”
In 2009, Silverstein’s boyfriend died in a car accident. While trying to understand and make sense of this life-altering event, she turned to the creative process to find meaning. Silverstein documented everything after her boyfriend’s death: She interviewed his friends, captured her own thoughts and feelings, traveled, and scattered his ashes around the world. “When someone dies suddenly like that, it’s a very unnatural feeling,” she says. “You’re just completely in shock, and things move really quickly. Maybe part of grieving is trying to understand or find meaning in why this event happened. I needed to make a story describing what it was all about.” Her four-year journey resulted in the creation of a feature- length nonfiction film, Afterglow, which premiered at the Reykjavík International Film Festival in Iceland.
Silverstein exhibited her first solo museum show at the Museum of Contemporary Art in Tucson in fall/winter 2019. The project, entitled The Fantastical Reconstruction of the Epine GY7, Chapter 1: The Fragments, documents the 1948 shipwreck of the British fishing trawler Epine GY7. The inspiration for the show emerged from a visit to Dritvik Beach in Iceland, where fragments of metal from the shipwreck remain. Silverstein documented and archived the three-dimensional fragments as graphic two-dimensional rubbings. “Every time I am in Iceland, I have this urge to document the pieces somehow,” she shares. “Finally, last summer, friends of mine and I went back, and we spent five nights, all night long, making rubbings of every piece of metal on the beach. The works are all about using fragments of evidence to create meaning—how in a sense all of our experiences are ‘redacted,’ and we are compelled to make sense of them.”
In addition to presenting in galleries around the world, Silverstein keeps her plate filled with various commissioned projects, including murals and billboards. UK-based premium paint and wallpaper manufacturer Farrow & Ball selected Silverstein to create the very first mural for their flagship showroom in West Hollywood. Using the brand’s proprietary paint, she created a 50-by-12-foot mural above the store. “I like any project that allows me to explore something I’ve been wanting to explore and gives me the opportunity to present that exploration in an interesting way,” Silverstein says. “Commissions can be very valuable, creatively.”
Her passion for art and poetry was nurtured at LJCDS. Silverstein fondly remembers the Bostons: Mr. Boston, Upper School English teacher, and Mrs. Boston, Upper School visual arts teacher. While she didn’t have Mr. Boston as a teacher, he helped her explore poetry. “It was like an independent study,” she recalls. “Mr. Boston helped me with poetry outside of regular class hours, challenging me to think about language in different ways.” About Mrs. Boston, she shares, “It was much more like a mentorship relationship. I was really into Egon Schiele, as most young art enthusiasts are, and I wanted to learn how he did what he did. She would help me learn the techniques to create what I was envisioning. These two nurturing and inspiring people both helped me find my voice.” Silverstein was the recipient of the Pen Women Award for her portrait work at LJCDS.
When Silverstein joined the LJCDS community in the second grade, former Head of School Chris Schuck was her second- grade teacher—and then also her fourth- and sixth-grade teacher, and eventually, her head of Upper School. “Mr. Schuck is a legend,” she says. “The ‘Only Connect’ quote by Confucius displayed in his sixth-grade class is something I still think about and ponder often. Every story he told was almost like a philosophical parable. He was brilliant and gentle, and that was a beautiful combination. Even though it has been so long, he is kind of a hero of mine.”
After LJCDS, Silverstein attended Columbia University, where she earned a bachelor’s degree in visual arts and comparative religion. She earned her MFA in painting from the Slade School of Fine Art in London. While at Slade, Silverstein became one of the inaugural advisors to the Outset Contemporary Art Fund in London.
Whitewall, an independent art and luxury lifestyle magazine, named Silverstein “Artist to Watch” in 2017. When asked what’s next for her, Silverstein shares she is using a scrapbook from a thrift store in New Orleans as a source of inspiration. She will also continue to do commissioned portrait work. Stay tuned.
Back