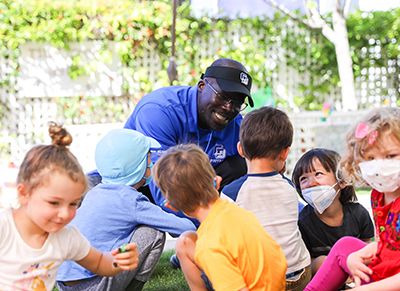 A Football Connection Leads to a Fulfilling Career

3/22/2022
By Jennifer Fogarty, communications content manager
PE teacher and coach Carmy Cesaire explains how a mentor changed his life.
Physical education teacher and coach Carmy Cesaire remembers going outside after snowstorms in Massachusetts with his brother when they were young to play one-on-one tackle football while pretending to be their favorite players. More than once, his parents had to patch up a few large holes in the walls when they tackled each other in the house. Football has always been an important part of his life, and it introduced him to a lifelong mentor.
In high school, Coach Carmy looked up to his football coach and principal Walter Dubzinski Jr. It was about more than the game. Coach Dubzinski became greatly influential in Coach Carmy’s career trajectory. More than 25 years later, Coach Dubzinski, now 80 years old, and Coach Carmy still stay in touch.
Coach Dubzinski recruited Coach Carmy to substitute teach at his alma mater, Gardner High School in Massachusetts. Coach Carmy later moved to a nearby school district, where he began coaching basketball and joined the special education department as a behavior specialist. When word spread about his success with the program, Coach Carmy earned a promotion as district-wide behavior educator. He also coached Division III college football and basketball at Fitchburg State University.
“I liked working with students in the classroom because it was like coaching,” shares Coach Carmy. “I could be myself. My students were my team who I had to motivate and teach. It felt natural. I wanted to be the type of teacher and coach like Coach Dubzinski. I wanted to be humble and caring. He is someone who defines what a servant leader is. He’s a different kind of teacher, coach, mentor. That’s the way I’ve tried to carry myself—to be helpful to everybody, be a team player and work hard.”
Coach Carmy has coached football and basketball for more than 20 years. He joined LJCDS in 2011 as a part-time assistant football coach before leaving for a short stint to coach at Scripps Ranch High School. In 2015, he joined LJCDS full-time. He teaches PE to students from Tiny Torreys to Grade 6 and coaches football, basketball, and track and field to Middle and Upper School students.
“The lessons I teach my students are to embrace the process, always keep learning, and have fun” shares Coach Carmy. “We all want to get right to the game and start playing, but we have to first work on specific skills. I try to make the process fun and engaging. There are a lot of steps before you see progress. The goal is to keep getting better. I tell the students that it’s OK if you don’t know how to do something, you’re going to learn it. Let’s just enjoy learning.”
With his remarkable ability and patience to work with a wide range of ages, Coach Carmy holds great pride in instilling a love of movement and staying healthy in youth. No matter their age, his goal is to create an environment that encourages students to take risks and helps them gain confidence.
Whether on the field or court, Director of Athletics Jeff Hutzler describes Coach Carmy as “that rare educator who is a master at both coaching the older students and connecting with our youngest Torreys at their level. He is a national-level varsity coach with an extremely high football IQ. Because of his wizardry coaching, we’ve had quarterbacks that lead the nation in passing yards. He figures out how to get the most out of his football players by fitting the system to the student and not the other way around. Nobody is more team-oriented; he does what needs to be done for the good of the community.”