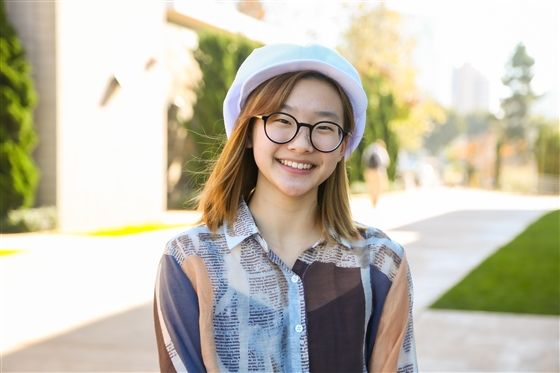 1/28/2020
By Jennifer Fogarty, communications content manager
How a graduating senior immersed herself in the LJCDS community.
After senior Revyn Kim dissected a human brain two summers ago, it solidified her decision to become a neurosurgeon. During the two-week summer medical academy hosted by Rady Children’s Hospital for high schoolers, she also learned how to suture on pig’s feet and to intubate. The program introduced her to a multitude of career options in healthcare through a mixture of lectures and discussions, clinics, group projects, career panels and networking activities.
“I always had an interest in the brain,” shares Revyn. “I looked into researching the brain and neurosurgery as possible careers. Last year, I interned at a local research lab and participated in medical programs where I could shadow surgeries. I just really loved being in the operating room, seeing the meticulous nature of the surgery and the camaraderie between the different healthcare workers.”

A year later, Revyn was accepted into the Rady Children’s advanced medical academy.
Revyn joined LJCDS after spending freshman year at a big public high school and being homeschooled since second grade. “The big atmosphere at the public school was such a shock to my system,” remembers Revyn. “I wanted a smaller school where I could foster better relationships with other students and my teachers. I felt very welcome here and found my group quickly.”
She promptly immersed herself in the community and took advantage of a variety of resources and opportunities on campus. Revyn is a leader of the Future Doctors and Scientists Flex Time, where members research topics in medicine or science, and she is one of the senior members of the Chemistry Lab Flex Time, which helps set up and break down chemistry labs and test experiments to help Mr. Todd Lineback. She also co-founded the Just Dance Flex Time and took on the role of senior editor for Pegasus, the LJCDS literary magazine.
Although she envisions a career in the medical field, Revyn plans to major in linguistics. “Since I'm planning to go to med school,” explains Revyn, “my undergrad experience will be more about delving into my interests. I really like languages and different cultures, and I want to learn more about that in college.”

She’s not kidding, as a freshman, Revyn learned Japanese, and as a sophomore, she took Mandarin I. After studying over the summer, and with the support of Ms. Amy Chang, her Mandarin teacher, she advanced to Mandarin IV Honors as a junior. She took a UC San Diego extension course in French and is auditing French at LJCDS this year.
She didn’t pause there. Over the last couple of years, she’s also taught herself Korean and took part in a language learning program in Korea. Last summer, she stayed at a homestay and attended classes (at the highest level) at Hanyang University in Seoul.

While her parents don’t speak Korean, this has been a special way for her to connect with her grandma whose English fluency is fading.

At the time of print, Revyn’s been accepted to Georgetown University and Northeastern University thus far.
Back