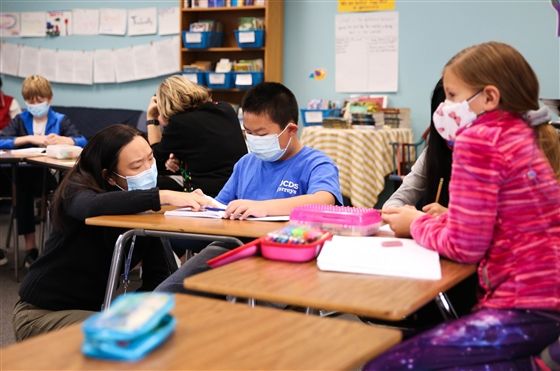 12/14/2021
By Jennifer Fogarty, communications content manager
Middle and upper schoolers benefit from author Jessica Kim’s two-day residency at LJCDS.
Jessica Kim held up a stack of rejection letters she received from her first attempt to write a novel. The sting is a little less now that her second attempt, Stand Up, Yumi Chung!, has been published. Jessica’s two-day residency is the first in-person author visit since the pandemic. She presented at assemblies for the Middle School, worked one-on-one with fifth graders, and interacted with Upper School English classes. 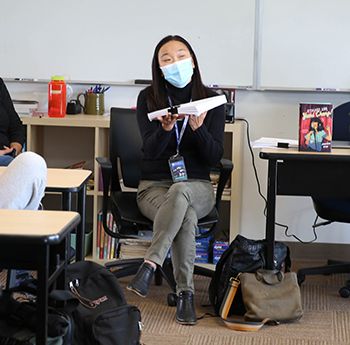 Jessica shared her journey from growing up straddling two cultures to becoming a teacher and wannabe comedian to discovering her desire to be a writer and the arduous steps of becoming published. She admitted those rejection letters at first discouraged her, but a question from one of the literary agents prompted her to try again with a new book geared toward middle school instead of the young adult audience she initially targeted. Magically, the offer letters poured in, and 18 months later, her first book was published. Jessica encouraged students not to give up on their dreams no matter how many rejections and obstacles they faced.
Fifth graders wrote their own stories and learned about character development during the writing workshop with the author. She challenged them to think about their favorite characters, why they like them and what makes them interesting. They used their imagination to create believable characters with flaws and weaknesses. Jessica’s number one tip to become a writer is to read a lot.
“It’s such a gift to give students the opportunity to meet and learn from published authors like Jessica Kim,” shares Middle School English Educator Danice VonFeldt. “Students are inspired by the personal connections they make, and it gives passionate student writers the spark to dream big. Jessica made her visit even more engaging as she helped guide students to create their own vivid characters. I’m excited to continue the learning experience in class.”
Upper schoolers peppered Jessica with questions on the process of writing, finding an agent and how she chose a publishing house. She spoke about the many novel iterations, what an advance means and when an author starts earning royalties. Jessica was most surprised to learn that writers do not have a say in the title of their books—that rule applies to the title, dialogue and plot changes if a movie is made from the book. Seeing as she just sold translation rights and movie rights to her first novel, Jessica is still on her learning journey while writing her second novel.