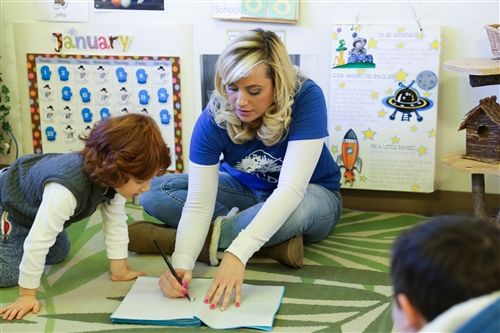 2/8/2017
By Early Childhood Center teacher Anna Fennessey
The Tiny Torreys and junior kindergarteners and their parents enjoyed an evening of investigation and observation at the Early Childhood Center Science Night on Tuesday, January 31. Their curiosities were stimulated by the many different science activities in each of the five classrooms and courtyard—complete with a selfie station, phases of the moon and glow sticks. Children were engaged in STEM activities, having fun while learning at the same time.

Students took part in experiments that involved chemical reactions, by combining water and Alka-Seltzer to make film canisters pop open and colored water and oil move like a lava lamp. They watched raisins dance in soda and a rainbow swirl form when soap was added to food coloring and milk. Eyes lit up when children saw a volcano erupt when vinegar and baking soda were mixed, and finally, cheers were heard throughout the ECC as the teachers made Mentos and soda blasts that reached 10 feet into the air!
Back